Start a Wiki
watch 01:51
The Loop (TV)
Do you like this video?
Janice Baird (Beverly D'Angelo) is the main villainess from "Werewolf Concerto," episode 4.13 of Tales From the Crypt (airdate September 9, 1992). She is a famous singer who was one of the guests in a hotel where a werewolf is prowling around killing its inhabitants. Janice runs into Lokai, an assumed werewolf hunter, and the two engaged in flirtatious banter. After another killing happens, Janice is suspected of being the werewolf by Lokai; due to the fact that she sleeps during the day and is up at night.

However, at the episode's climax, Lokai is revealed as the werewolf and he searches for Janice, who he knows is the actual werewolf hunter. After Lokai's transformation, Janice comes from behind and kills him with a silver candelabra through his heart. A dying Lokai points at Janice's piano, which Janice states is her traveling companion. In the final scene, the evil Janice reveals herself as a vampire, and flashes her fangs at Lokai before she devours him. 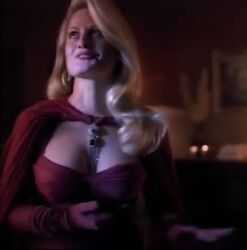 Janice reveals herself as a vampire
Add a photo to this gallery
Retrieved from "https://femalevillains.fandom.com/wiki/Janice_Baird_(Tales_From_the_Crypt)?oldid=153776"
Community content is available under CC-BY-SA unless otherwise noted.