After Marke learns that the device Xander's crew destroyed was a prototype, Xander's crew headed to Detroit to retrieve the real device, which was in the possession of rogue CIA Director Anderson, who is actually part of a conspiracy to destroy the satellites. Though both Xander's and Xiang's crews were fighting each other to get to Pandora's Box, they eventually returned to Marke with the device. At that moment, however, Marke turned heel and held Xander at gunpoint, revealing herself as the mastermind of the conspiracy, with the destruction caused by the falling satellites meant to ensure that she could increase her own power. 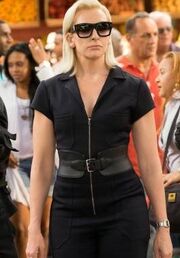 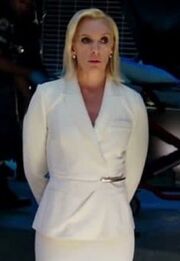 My plan is working perfectly!

Death? The last great adventure? What's he talking about?

First skydiving lesson: Never let one of your feet get caught in a line!

Get your ass on the floor!

0! Don't forget to send us a postcard, bitch!
Add a photo to this gallery
Retrieved from "https://femalevillains.fandom.com/wiki/Jane_Marke_(xXx:_Return_of_Xander_Cage)?oldid=192736"
Community content is available under CC-BY-SA unless otherwise noted.