Start a Wiki
watch 01:39
The Loop (TV)
Do you like this video?
Jane Doherty (Maggie Marion) is the hidden main villainess of the 2006 film Killer Yacht Party (alternately titled Dead in the Water). Her brief backstory revealed that she was an aspiring musician new to Los Angeles, with the film's events having Jane and her best friend Lacy being invited to an exclusive VIP yacht party.

Jane was also revealed to have a long-time crush on Gavin (who was also a guest at the party), with Lacy encouraging Jane to talk to him despite her reserved nature. While Jane and Gavin appeared to connect during a conversation together, Jane lost interest when she caught Gavin receiving a lap dance from Monica (the girlfriend of party host Brock). Jane also fought with Lacy after she chided Jane's desire to leave the party and was left furious when she caught her having sex with Gavin.

Throughout the film, an unseen figure was shown killing off partygoers, with the ghost of the yacht's previously owner (who was murdered on the boat by her husband) being suspected of being responsible. However, the film's progression ultimately revealed the true culprit: Jane. After seeing her encounter with Gavin, Jane turned heel by attacking and stabbing Monica to death with broken mirror shards. The evil Jane then went about killing several other party goers, donning a pair of black gloves during her murder spree. After catching Gavin and Lacy having sex, Jane proceeded to kill her former crush using a hook, stabbing him in the crotch and slitting his throat, with his body falling into the water. Jane then briefly locked Lacy in the freezer while she stabbed a busboy to death with a knife, opening the door just before Lacy discovered Gavin's body in the freezer (having been retrieved by Jane). After running outside and finding the busboy's corpse, Lacy hid inside the oven when she heard Jane approaching, allowing the scorned villainess to kill her friend by using her knife to jam the door before turning the oven on, burning Lacy to death.

A fire then broke out, and as the partygoers attempted to flee, Jane blocked the doors to the party room with an oar and rope, leaving the partygoers to burn to death. It was then that Jane found herself confronted by Chance, a drug dealer who had snuck onto the boat to steal money from Brock and who had managed to escape the fire with only a burned hand. As the bloodied Jane clutched an oar, Chance told him how there was a killer on the boat, with Jane feigning tears before dismissing the belief that the previous yacht owner's ghost was haunting the ship and killing people. Chance then attempted to take the oar from Jane, only for her to strike him with it and fight him off when Chance tried to attack her. After seeing that Chance had managed to steal some of Brock's money before fleeing the fire, Jane snarled that Chance was "just like everyone else" before bludgeoning him to death with the oar and escaping the burning yacht in a life raft.

Jane was later found by a fisherman and picked up by an ambulance, telling one of the paramedics that there were no other survivors; with her phrasing that "everyone on that list was dead" indicating Jane's heel turn and killing spree was done out of resentment against the VIP partygoers. Shortly after that, however, Fiona (one of Brock's employees for the party) was revealed to have survived as well as she was taken into the ambulance. As she looked at Jane, Fiona--who was revealed to have psychic abilities--recalled having inadvertently sensed Jane's heel persona after touching her hand, causing her to realize she was responsible for the massacre. Fiona's revelation about Jane and pleas to be let out of the ambulance were ignored by the paramedics, and as Fiona was tended to by a paramedic, Jane stated that she just wanted a fresh start and was thinking of going to Seattle to check out the music scene, with the final shot of the film showing that the medication Jane was shown taking earlier in the movie was lithium. Jane's ultimate fate is left unknown after she and Fiona were taken away in the ambulance.

Jane's hand as she kills Dante with a flare gun 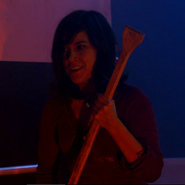 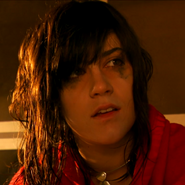 Add a photo to this gallery
Retrieved from "https://femalevillains.fandom.com/wiki/Jane_Doherty_(Killer_Yacht_Party)?oldid=164400"
Community content is available under CC-BY-SA unless otherwise noted.