Start a Wiki
watch 01:48
The Loop (TV)
Do you like this video?
Jane (Kate Micucci) is the hidden main villainess from the short comedy film, Werewolves, released on Halloween 2014. She appeared as one of the townspeople who found the local seer dead, having been killed by a werewolf who had been rampaging the town and killing its inhabitants. Jane immediately pinpoints Harvey as the werewolf, but despite clear evidence (the fact that he was in his werewolf form and covered in blood), the rest of the townspeople don't believe her and start hurling wild accusations. After making attempts to convince the Mayor not to lynch anyone, Jane hurls a random accusation to make a point, accusing Bill of being the werewolve, which the Mayor and the rest of the group instantly believes.

After the group leaves, Jane reveals herself as a werewolf, as she and Harvey had been committing the murders--including the seer. She scolded Harvey for not cleaning the blood from his person, and she convinced Harvey that she fingered him in a case of reverse psychology; covering for her true plan to have the town all to herself. As the villainous couple planned their next murder, Elenor appeared to get her pitchfork, while seeing Jane and Harvey in their werewolf forms. The film ends with the evil Jane convincing her oblivious co-hort that they had to kill Elenor. 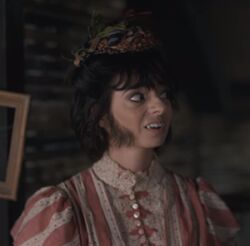 Jane revealed as a werewolf
Add a photo to this gallery

Retrieved from "https://femalevillains.fandom.com/wiki/Jane_(Werewolves)?oldid=200763"
Community content is available under CC-BY-SA unless otherwise noted.