Start a Wiki
watch 00:17
The Loop (TV)
Do you like this video?
Jag is a minor antagonist and SMERSH agent in the 1967 spy spoof on the James Bond film "Casino Royale".  Although this agent was uncredited in the screenplay of the film, she has since been credited on IMDB, the Cinemorgue Wiki site, and some other James Bond websites, as being played by the late French actress Mireille Darc (1938-2017).

In the film, we see Sir James Bond (David Niven) leaving Scotland and heading back to London driving his Bentley convertible.  All of the sudden, we see a pale lemon Jaguar E-type convertible begin to gain on him.  It is being driven by a beautiful short-haired blonde girl wearing a white jacket, white gloves, red scarf in the form of a tie, and sunglasses positioned on top of her white hat.

The girl begins to pass Bond and smacks her car into his.  This would be the equivalent of someone slapping you across the face with your glove, and Bond does not take this lightly.  He begins to speed up in order to catch her.  After the Jaguar makes a sharp right turn onto a side road, Bond follows suit, and we have the makings of a great car chase scene.

The blonde glances over her shoulder with a smirk on her face.  She then presses a button on her dash and the center of her steering wheel pops out.  What appears is a pop-up microphone, and the girl uses it to call "Dairy" to tell them that the "contact" is in position.  The girl has a slight French accent, and we soon see that Dairy is the code name to the SMERSH headquarters.  At the headquarters are a small bevy of curvy brunette women agents siting in the middle of a circular enclosure.  Each of them are running computers, video surveillance cameras, and other hi-tech controls.  The actresses playing these parts are Penney Riley (leader), Anne De Vigier, Carol Shaw, and Jenny White.  Surrounding the area are three large ten-foot high transparent maps showing roads on them, with women in white tights and go-go boots updating the information on them.  The four women seated in the center are dressed wearing blue air hostess type outfits.  Around the outside of their inclosure is a miniature replica map of the countryside, which has electric car models depicting Bond and the Jaquar on it.

The SMERSH girls acknowledge the driver, who they refer to as "Jag", which is her code name, probably because she is driving the Jaguar.  I saw in one James Bond site, that they refer to the driver as "Jane the Assassin".  In no other sites have I seen her refered to as Jane, but this could be due to the fact that it sounds like Jane when they later try to summon Jag.

The main headquarters girl orders one of the other girls in the office to ready the remote control, as the others confirm the speed and distance of the two vehicles.  Suddenly a driver-less milk delivery truck begins to follow Bond after the two cars pass it on the side of the road.  Inside the milk truck is a big toolbox connected to sticks of dynamite, so we begin to see that their plan is to blow up Bond.

Bond begins to notice that he has gone from being the chaser to the chased, and sees himself boxed in.

A video feed positioned on top of the milk truck allows a signal to the headquarters, and the girls are closely monitoring it's every move.  The girls are operating the controls using this video feed.  In addition, the milk truck's headlights push out and extend an extra couple of feet, which I assume will be used to detonate the bomb on the intended target.

Jag radios headquarters to tell them that Bond is too close to her, and that it is too dangerous to detonate the bomb, which would probably kill both of them.  The main SMERSH agent tells her subordinate running the milk truck remote to ignore Jag and continue the chase.  The three vehicles travel around some very sharp curves.

The chase continues into an intersection with a flatbed truck that has spilled it's load of lumber, and many of the pieces are strewn across both side of the road.  Jag and Bond take opposite sides of the truck to pass it.  However, the milk truck is unable to go around, and drives up and over the truck using the planks of wood to get some serious air.  The severe jostling knocks out the camera on the roof, and several of the milk crates inside the vehicle break which shorts out the radio frequency to Jag.

The heaquarters girl switched to automatic control, so that they use a homing device to follow the other two cars.  Jag's frantic requests to drop speed go unheard as the communication has been dropped.  Here we see Headquarters also attempting to contact the driver by repeating "Come in, Jag!".

Bond who is now in the lead approaches the gate.  He opens it with a control on his dashboard, and then drives through.  Next we see it close behind him, leaving Jag with no chance to follow.  She skids sideways into the gate, and then we see her turn and scream as the milk truck crashes into her.  Both vehicles explode on impact, and there is nothing left of the lovely Jag or the Jaguar for that matter.  The last thing we see is Bond stopping on the road to look back, and him tut-tutting as if to say, "what a shame". 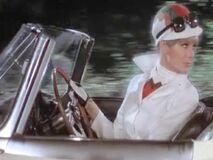 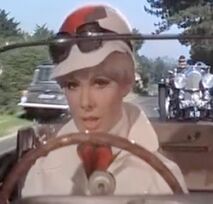 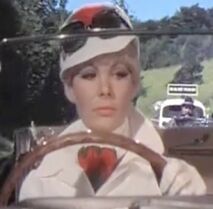 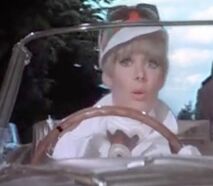 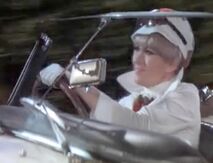 Add a photo to this gallery
Retrieved from "https://femalevillains.fandom.com/wiki/Jag_(Casino_Royale)?oldid=213239"
Community content is available under CC-BY-SA unless otherwise noted.