Jade is a minor villainess from the 1997 movie Mortal Kombat Annihilation. She is played by the model and actress Irina Pantavea.

The Mortal Kombat heroes, including Liu Kang, Raiden, Kitana, Sonya and Jax fight to prevent the takeover of Earth realm by the cuel Outworld tyrant, Shao Kahn. Jade’s first encounter with the hero, Liu Kang, is in a snowy, deserted landscape, wearing nothing but some shabby clothes. After failing to seduce the hero, she suddenly appears in her fighting gear and challenges Liu Kang to a fight. Jade dominates the duel at first, but Liu Kang’s superior fighting skills prevail and she eventually finds herself pinned to the ground and at his mercy. Jade suddenly giggles and claims this was only meant to be a test of Liu Kang’s purity and strength, and promises to lead him to the Temple of the Elder Gods. After reuniting with the rest of the Earth realm warriors, Liu Kang introduces Jade. The green-clad warrior gets a mixed reception; in particular, Liu Kang’s female allies, Sonya and Kitana, appear suspicious. They turn out to be right, because Jade eventually leads them into an ambush. Fortunately, the heroes can fight their way out, but not before Jade manages to escape. Her treachery is now apparent to all, including Liu Kang. Jade reports back to Shao Kahn’ headquarters. Her master is less than satisfied, because she let the Earth realm warriors get away. Jade pleads that she did everything he ordered and that their opponents had them outnumbered. Queen Sindel intervenes in her favour, but Shao Kahn is determined to punish the villainess for her failure. He grabs her by the throat and lifts her up like a doll. The wicked traitor starts panicking and anxiously kicks her arms and legs about, but she cannot free herself from Shao Kahn’s hold. A living gargoyle emerges from the wall as Jade rolls her eyes in horror. Shao Kahn feeds his luckless spy to the beast, which devours the girl with great appetite. After loud chewing and a healthy burp, the monster retreats and nothing remains of the once beautiful, but perfidious Jade: Shao Kahn has made an example of her to show that he will take no excuses for failure. 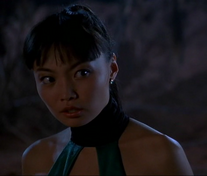 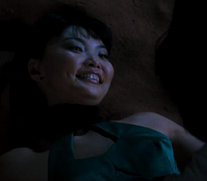 Add a photo to this gallery
Retrieved from "https://femalevillains.fandom.com/wiki/Jade_(Mortal_Kombat_Annihilation)?oldid=201615"
Community content is available under CC-BY-SA unless otherwise noted.