Jacqueline "Jackie" Mikhailova (Annika Boras) is the main villainess of "Day of the Jackie", episode 2.03 of Unforgettable (airdate August 11, 2013). She was an elusive Russian assassin who, at the age of 14, joined mercenary group Alpha Five after her parents were murdered by Chechan separatists. By the events of the episode, Jackie was a person of interest in eight assassinations in the past two years.

"Day of the Jackie" Edit

In "Day of the Jackie", Jackie's target was Dr. Okoro Dimka, a political activist from West Africa who was in New York to speak at a rally against the corrupt diamond monopolies in Africa. In order to track down Okoro, Jackie infiltrated the hotel room below his press attache, Kevin Purcell, planting a device in the air vent to hack into his cell phone and access Okoro's schedule. When Paul Dirkson, the owner of the room, returned, the evil Jackie acted as though she were hired by the hotel to entertain him before poisoning him with tomexide, strangling his corpse with his tie later to throw the police off her trail. Later on, while putting together a sniper rifle in her motel room, desk clerk Larry Yablonski interrupted Jackie in an attempt to smoke the marijuana she claimed to have with her, resulting in Jackie killing him as well with a bullet to the head.

When the Major Crimes investigators realized the reason behind Paul's murder as well as Jackie's criminal history and plans to assassinate Okoro, the team set up a sting operation at a cafe to catch her. But when Jackie entered the restaurant, disguised as an elderly woman, she instantly realized that the police were there and fled, using a poison in her ring to give an undercover a heart attack and sharing eye contact with Carrie Wells (whose attempt to stop Jackie was thwarted by a locked door) before leaving. Later, Jackie was shown doing research on the stadium at Hudson University where Okoro was planning to make a speech, as well as researching Carrie's work as a detective.

In the episode's climax, Carrie and Al Burns uncovered Jackie's research on a computer at a cyber cafe, indicating that Jackie planned to sneak into Okoro's Hudson University speech disguised as a journalist. But as the team patrolled the university, Carrie realized that Jackie had planted the evidence leading the detectives to her "research" to throw them off her true plan. Carrie eventually confronted Jackie on the catwalk in the auditorium, where she was preparing to shoot Okoro with the sniper rifle. After a fight with Carrie in which Jackie pulled out a knife, Carrie pulled out her gun and forced Jackie to drop the weapon. After chastising the police for botching the earlier sting operation and stating that her plans were all about "preparation", Jackie seemingly killed herself by ingesting a poison from her ring.

But after seeing the dog of the guard Jackie had subdued to get on the catwalk alive, Carrie realized that Jackie had only swallowed enough tomexide to knock herself out (doing the same thing earlier due to her fondness for dogs). As Al called in the information, however, it was revealed that Jackie had already killed the paramedics driving her away and fled.

Jackie reappeared in episode 2.09, "Flesh and Blood" (airdate April 11, 2014), during which she was shown setting her murderous sights on her fellow Alpha Five associates, first killing Yevgeni Visov while he was in the hospital being treated for cavernous hemangioma. After the murder, Jackie stole a flash drive that Yevgeni had that controlled a bomb that had been planted in New York, as part of a plan to spark a war between the US and Iran. Jackie then approached Petra Kekilli, another former Alpha Five member, while she was out at the park with the children she was the nanny for. After Petra refused to tell Jackie where their leader, Victor Siyenko, was, Jackie got into a brawl with Petra before poisoning her with tomexide, killing her and watching from afar as Al and Carrie arrived at the scene.

Jackie was eventually caught at the hotel where Jackie had just seemingly killed Sergei Kirsakov, doing so after holding him at gunpoint in an attempt to get him to tell her where Victor was. While holding Sergei hostage, Jackie revealed how she had killed Yevgeni and Petra, claiming that she'd given them the chance to walk away alive and killed them when they fought back. Carrie managed to catch Jackie as she was preparing to leave the hotel, trapping her in the revolving door before placing her under arrest. Jackie was initially uncooperative with Agents Stone and Thorne (who were brought in by the International Counterterrorism Agency), but Carrie ultimately pieced together how Jackie had left clues for her to use to find the flash drive she'd stolen from Yevgeni.

While alone with Jackie in her holding cell, the villainess revealed the whole truth: she had a son with Victor named David, who Victor had taken from her after she attempted to leave him and Alpha Five, and she was planning to trade the flash drive with Victor for David. She also revealed that she hadn't killed Sergei and that someone in the ICA (later revealed as Agent Stone) was actually a rogue agent working for Victor and was responsible for that murder. Despite Carrie disapproving of Jackie's willingness to sacrifice thousands of lives, she agreed to help Jackie get David back as a means of taking down Victor and Alpha Five.

Their plot commenced when Agent Stone caught Carrie and Al as they were seemingly transferring Jackie as a prisoner, with Jackie knocking the detectives out with her trademark poison before giving the drive to Stone and ordering her to take her to Victor. There, Jackie gave the supposedly real drive to Victor, which in actuality was a fake that crashed Victor's computer. The police burst in and shot Agent Stone dead as he attempted to kill Jackie, and as Victor was placed under arrest, Jackie told him that she'd be waiting when Victor threatened to escape prison and come after her and David. Jackie was then placed under arrest herself after bidding a goodbye to her son and asking Carrie to make sure David got a chance at a normal life.

Jackie practicing with her sniper rifle 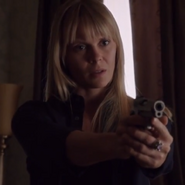 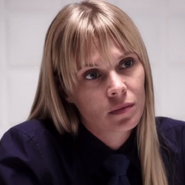 Jackie in interrogation
Add a photo to this gallery
Retrieved from "https://femalevillains.fandom.com/wiki/Jackie_Mikhailova_(Unforgettable)?oldid=140387"
Community content is available under CC-BY-SA unless otherwise noted.