Start a Wiki
watch 01:24
The Loop (TV)
Do you like this video?
Jacqueline "Jackie" Anderson (Krista Allen) is the main villainess from the 2018 Lifetime film, Party Mom (alternately titled Nightmare Moms; airdate March 30, 2018). She is the divorced mother of Ashley Anderson, the best friend of Brittany Thompson.

Jackie is first shown throwing a wild party involving Ashley and a number of her friends, including Brittany, who Jackie told to refer to her by her first name instead of "Mrs. Anderson," stating that she's not old enough to be a "Mrs." (in her mind). The film's progression shows that the parties at the Anderson home are a regular occurrence, and in every one of them, Jackie purchases (and consumes) a high amount of alcoholic drinks for Ashley's friends, who are minors. Regarding Jackie's personality, Brittany herself described Jackie as a narcissist after leaving the Anderson home with her father, Gary.

Brittany later snuck out to another party at Ashley's home, doing so over spending a movie night with her parents and sister, and this ended up leading to Brittany leaving that party and heading to another one with three other teens: Travis, Sasha, and Dillon (who was driving drunk). They ended up in a collision with another moving car, with the three others getting killed and Brittany surviving but badly injured. After Gary and Caroline found Brittany and took her to the hospital, Jackie ended up reported to police, and arrested for serving alcohol to minors, as it led to the crash. The villainess protested the arrest, and during her bail hearing, she snapped at the judge and at Caroline's protest that Jackie shouldn't be allowed bail due to a high chance of her re-offending. Despite this, Jackie ended up with a bail posted at $100,000, which was quickly paid.

When Jackie arrived home and saw that the house was a mess, she voiced her displeasure towards Ashley for not cleaning up while she was in jail. Jackie's callousness increased when she responded to Ashley's statements about her mother's actions by blaming Ashley's friends and their parents for allowing them to go to her parties, and when asked if she felt any remorse for the victims of the crash, Jackie claimed that she did, but they (Travis, Sasha, and Dillon) were dead, and she can't do anything. Ashley walked upstairs and stated that she would be moving in with her father, while stating that Jackie was not a mother to her and never was, only for the villainess to belittle her daughter's decision.

Jackie's trial resulted in her being acquitted of all charges against her, and she celebrated and hugged Ashley (who was astonished at the acquittal). Gary and Caroline were immensely dismayed over the result, and later in the film, a masked intruder entered the Anderson house looking to kill Jackie, only to shoot and kill Ashley instead; firing four shots. After Gary arrived at the scene, he was arrested, but it turned out that the murder was committed by Sasha's father. Meanwhile, Jackie became angry and vengeful over Ashley's murder, believing that Gary killed Ashley while agreeing with her friends' elitist comments stating that the jury was upset because they were full of people who were beneath them.

The film's climax saw a distraught and inebriated Jackie at the Thompson home, with Caroline answering the door. Jackie asked Caroline if she thought she was guilty, with Caroline stating to Jackie that she was responsible because she served alcohol to minors at her parties. Jackie asked about Brittany's well being, only to later rant about Gary killing Ashley (not knowing that Gary was innocent) and pull out a gun, as she planned to kill Gary's loved ones. The women wrestled over the gun, but after pinning Caroline to the couch, the evil Jackie unleashed an elitist rant, stating that Caroline and her family should have stayed in the valley and that girls like Brittany didn't belong in Beverly Hills. Just as she was about to fire her gun, Gary returned home and tackled Jackie, while taking the gun from her possession. Caroline managed to talk Gary down, and Gary vows that he will make sure Jackie will go to prison forever. Upon hearing this, a frightened Jackie attempts to flee, but Gary stops her by punching her in the face, knocking her out. In the end, Jackie ended up being arrested again, this time for attempted murder. The film ended with Jackie in her jail cell demanding to be released, while complaining about a lack of her materialistic frills. 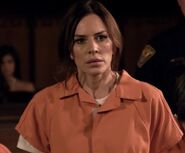 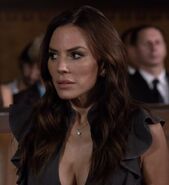 Add a photo to this gallery
Retrieved from "https://femalevillains.fandom.com/wiki/Jackie_Anderson_(Party_Mom)?oldid=182502"
Community content is available under CC-BY-SA unless otherwise noted.