In high school, prior to the film's events, Jackie engaged in a brief relationship with Kyle Hastings. After the relationship ended, Kyle fell in love with Jackie's younger sister, Sam, and they became husband and wife, all while Jackie secretly harbored resentment and jealousy towards her sister; blaming Sam for (in her mind) taking Kyle from her.

Jackie continuously stalked Kyle and continued her obsession, leaving Kyle suspicious but not knowing who was after him. Six weeks prior to the film's events, Kyle was at Jackie's home discussing Sam's miscarriage, which was her second. Jackie feigned sorrow for her sister, but she revealed her true colors to Kyle and begged him to come back to her, stating that she could carry his babies, unlike Sam. Kyle professed his love for Sam and turned down Jackie's advances, and following this, Jackie drugged Kyle and kept him tied up downstairs. Kyle was held captive for weeks, and Jackie convinced Sam that Kyle disappeared on a trip with his business partner, Mark Chadwick. All the while, Jackie informed Kyle that Sam left her and she planned to take care of her.

After abducting Kyle, the evil Jackie began her plan to kill her sister. While working as a nurse, Jackie stole anxiety pills from her workplace (which got her fired) and kept giving them to Sam hoping she'd overdose. After Sam moved out of her smart house, H.O.S.T. (which Kyle devised), she moved into a small home in Gravity Hill, and even there, Jackie made subtle attempts to kill her sister. Later on, Jackie donned a hooded disguise and entered the house while Sam was away, taking (among other things) a photo of Kyle and Sam together. She was later caught by Darren Zucker, who threatened to call police after confronting her, which led to the villainess striking Darren with a shovel, killing him. Jackie later placed Darren's body inside his car and pushed it down a cliff, to make it appear that he was killed in a car accident. She even taunted Sam by placing a talking baby doll in her bed, which Sam found. All the while, Jackie continued to act like a supporting sister to Sam, keeping her evil persona hidden.

After being informed by Mark that Darren wasn't killed in the accident but by blunt force trauma, Sam phoned Jackie about the discovery, while also finding a bloody shovel at the house. She later drove to Jackie's place, and it was there that she saw wind chimes (which Kyle stated he was hearing), and the aforementioned framed photo. Sam also found Kyle alive and tied up, and it was there that he revealed that Jackie was behind everything. Sam ran upstairs to find something to cut Kyle free, only to be knocked out from behind by Jackie.

Her villainous reveal confirmed, Jackie took her sister back to her new house and boldly confessed everything to Sam, while also showing off a diamond engagement ring. Jackie stated that she was entitled to a good life with Kyle, and blamed Sam for everything that went wrong in her life; including her failed relationships and losing her job as a nurse. Sam's attempt to escape and fight her evil sister were thwarted, and later on, Jackie used the smart house technology to trap Sam inside the house. The crazed villainess later resurfaced behind the wheel of an excavator and demolished the house in an attempt to kill Sam; all the while, Kyle broke free and phoned police, who arrived and arrested Jackie after Kyle helped Sam escape the collapsing house.

In the film's final scenes, Jackie was in her cell watching Kyle and Sam (with their new baby) giving an interview. She maintained her delusions and obsession with Kyle, and continued to claim that she and Kyle would be together again one day.

Jackie pointing a knife at Sam 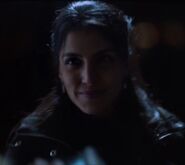 Jackie smiling evilly after locking Sam inside the house 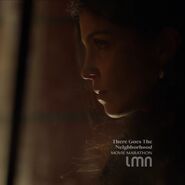 Jackie inside the excavator

Jackie in her jail cell
Add a photo to this gallery
Retrieved from "https://femalevillains.fandom.com/wiki/Jackie_(Tiny_House_of_Terror)?oldid=145120"
Community content is available under CC-BY-SA unless otherwise noted.