The Female Villains Wiki
Register
Don't have an account?
Sign In
in: 1940s, A Taste Of Her Own Medicine, Animal Murderer,
and 25 more

Ivora is a villainess from Jo-Jo Comics #22. She appears in the story The Fantastic Tusks Of Terror.

She seeks to obtain power in the jungle and to claim Jo-Jo The Congo King as her mate. She is first seen ordering her tribesmen to wound elephants with spears, she also threatens them with death if they make a mistake. One of her men kills the elephant, rather than wounding it, this angers Ivora, the tribesman grovels at her feet and begs for mercy, but she orders the rest of her men to kill him for his failure. She eventually successfully wounds another elephant herself. Her reason for wanting to wound elephants is so they will stumble to the place of their ancestors, where they themselves go to die. She is after their ivory tusks.

Later she kidnaps Jo-Jo's mate Tanee, and her men also capture Jo-Jo when he goes looking for her. Ivora offers Jo-Jo the chance to be her mate or to die with Tanee. Jo-Jo refuses of course, and so Ivora sets up a death trap for Tanee involving the gallows and a rope, her intentions would be for Jo-Jo to accidentally kill Tanee. She throws a deadly snake at Jo-Jo with the intention of hastening Tanee's death. But Jo-Jo manages to grab the snake and throw it back at the evil Ivora, the snake attacks and kills her. 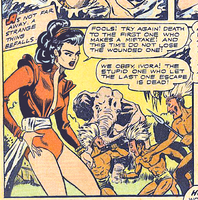 Page 3: Ivora threatens her men with death if they fail her 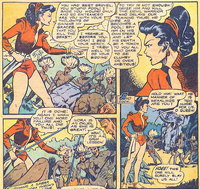 Page 4a: A native grovels at Ivora's feet and begs for mercy, but she has none for him

Page 4b: Throwing a spear at an elephant 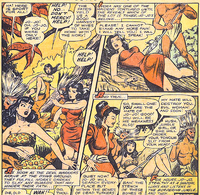 Page 8: A jungle girl is tortured under Ivora's orders 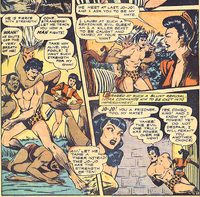 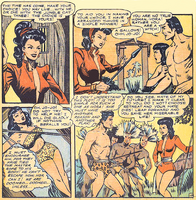 Page 10: Ivora sets up a cruel death trap for Tanee 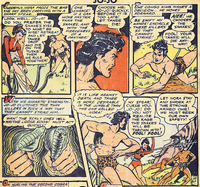 Page 11a: The evil Queen releases some snakes

Page 11b: The evil Ivora is killed by her own snake

Page 11b: Alternative
Community content is available under CC-BY-SA unless otherwise noted.