Ivana Karnos and her family are the owners of the puppet theater.

Recently, their business began to go bad. One evening a mysterious stranger came to them and suggested real little people. They happily agreed to his terms. Ivana and her family told the little men that the performance would be safe and the requisites on the stage would be wooden. When the show began, they deceived the dolls and gave them real swords and daggers. After the performance, they burned the bodies of the little people they had killed. The next day they did the same. A little later a stranger came to them again and they asked him to bring more new little ones. It turned out that they were inhabitants of the planet of giants and a stranger came to Earth, to New York, to replenish his reserves. 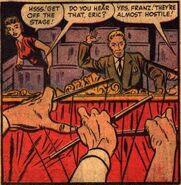 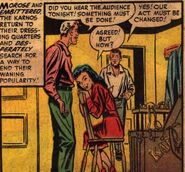 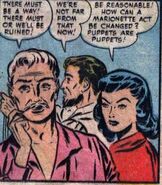 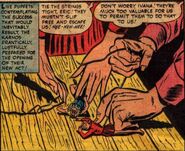 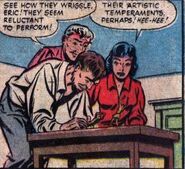 Add a photo to this gallery
Retrieved from "https://femalevillains.fandom.com/wiki/Ivana_(Tomb_of_Terror)?oldid=193798"
Community content is available under CC-BY-SA unless otherwise noted.