Start a Wiki
watch 01:48
The Loop (TV)
Do you like this video?
Isabelle Vanetti (Kristen Renton) is the villainess of the 2019 film Marriage Killer.

Isabelle's brief backstory revealed that Isabelle was a foster child, bouncing between various homes. Isabelle was also bullied for being overweight, with her low self-esteem and feelings of being unloved driving Isabelle to contemplate suicide.

In adulthood, Isabelle was introduced to open relationships and swinger's clubs by an unnamed couple, allowing Isabelle to become confident. Isabelle also revealed her psychotic side when she (for reasons unrevealed) killed the couple, setting their car up to explode.

In the film's current events, Isabelle was working as a physical therapist, meeting main protagonist Morgan D'Angelo after her friend Anna brought her to Isabelle. During the visit, Morgan talked about her struggles with her husband Robert, prompting Isabelle to talk about an adult club she was a member of known as Secret Sins. Isabelle later attended a party at Morgan and Robert's house, and invited the D'Angelos to join her at Secret Sins to reinvigorate their marriage. Morgan and Robert agreed, and during the night out, Isabelle approached Morgan and Robert regarding the possibility of them joining her in an open relationship.

After giving Morgan the flowers, however, Isabelle excused herself to go upstairs to their bedroom, claiming she had lost one of her earrings during their tryst. While in the room, Isabelle steals Robert's credit card and later gives it to a bartender at Secret Sins, claiming she found it there. Upon seeing Robert at the club retrieving his card, Isabelle paid a pair of female clubgoers to begin acting flirty with him, allowing Isabelle to take a picture and show it to Morgan later, making it appear Robert was cheating on her.

Isabelle later convinced Morgan to join her at Secret Sins as a means of getting even with Robert, during which time the villainess drugged Morgan's drink, allowing her to record her as she had sex with several clubgoers; a fact that Morgan became angry with Isabelle about later. After creating a fight at Secret Sins to distract the owner, Isabelle got the membership list and went to a copy shop (while wearing a hooded disguise) to leak the list along with the video of Morgan. To cover her tracks, Isabelle put on a show of hysterics when Morgan went to confront her about the list, making it appear that she was innocent by claiming she was losing patients as a result of the list being leaked. As a result of Isabelle's actions, Robert's business suffered to the point of having to declare bankruptcy and deciding to move out of the house, with the D'Angelos' marriage and relationship with their teenage daughter Abbey also suffering.

While staying with Morgan to comfort her, Isabelle also began bonding with Abbey, giving her a makeover so that she could join her for a night out at Secret Sins. Upon seeing her daughter, however, Morgan blasted Isabelle and argued that the 17-year-old Abbey was too young to be dressed so provocatively, only for Abbey to leave with Isabelle after fighting with Morgan. On the drive to Secret Sins, however, Isabelle opened up about her troubled past and stated she would trade place with Abbey in a heartbeat, unnerving Abbey along with Isabelle attempting to kiss her and leaving her by herself on the dancefloor at Secret Sins. As Abbey relayed her concerns about Isabelle to Morgan after her mother picked her up at Secret Sins, Robert discovered upon tracking the posted list and video to the copy shop that Isabelle was behind the leak, leading him to call Isabelle and confront her.

Isabelle arranged to meet Robert at his rental home, with Robert blasting Isabelle for her actions destroying his career and family. Isabelle responded by declaring her love for Robert and Morgan, claiming they could've all had a perfect life together and rejecting Robert's truthful claims that Morgan was the only woman he loved and that their tryst with Isabelle meant nothing to them. Robert briefly caressed Isabelle's face before grabbing her by the throat, ordering her to leave. In response, however, the evil Isabelle declared she wasn't going anywhere before striking Robert in the head with one of his golf clubs, fleeing the house after seeing Morgan arrive.

In the aftermath, Robert was hospitalized in a coma, with Morgan being considered a suspect in his assault due to the conflict in their marriage. When questioned by detectives Erickson and Barber, Isabelle painted Robert as an unfaithful sex addict having an affair with her and Morgan as a scorned and vengeful villainess who attack Robert in revenge. Isabelle later visited Robert in the hospital with a plate of cookies, attempting to tamper with his IV in another murder attempt before she was interrupted by Abbey. In the film's climax, Morgan fled arrest and confronted Isabelle at her house, while the villainess was preparing to flee town. As a ploy to get a confession from Isabelle, Morgan claimed she had in fact attacked Robert and was now planning to kill herself, with the ploy working when Isabelle revealed how Robert affirmed his love when she met him at his house.

When Morgan confronted Isabelle about attacking Robert, Isabelle claimed she hadn't meant to hurt him and angrily demanded for her to let her make her escape, threatening to tell the police she'd come to kill her as well if she called them. Morgan, however, revealed that she had recorded her confession on her phone, driving the deranged villainess to shove Morgan onto the couch before coming at her with a knife, with Isabelle chasing Morgan outside. The fight began a physical brawl between the women, with the fight ending with Morgan subduing Isabelle before calling the police. As Isabelle was handcuffed and arrested, she asked one of the officers if he was married, and mockingly praised him when he responded that he was. 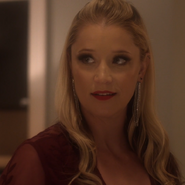 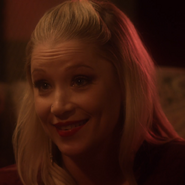 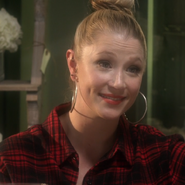 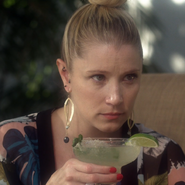 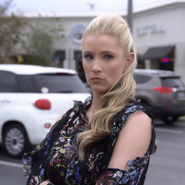 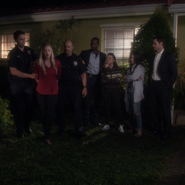 Isbelle's arrest
Add a photo to this gallery
Retrieved from "https://femalevillains.fandom.com/wiki/Isabelle_Vanetti_(Marriage_Killer)?oldid=158305"
Community content is available under CC-BY-SA unless otherwise noted.