Start a Wiki
watch 01:48
The Loop (TV)
Do you like this video?
Isabella Narcisse is the villainess of "Pain in the Neck", case #38 of Criminal Case: The Conspiracy, the 5th season of the crime solving game Criminal Case (release date October 4, 2018). She was the wife of René Narcisse, an economics professor at Grimsborough University who was found stabbed to death in the college's dining hall.

While Isabella initially appeared devastated by the death of her husband, a voicemail on René's phone would reveal that their marriage was tense in regards to finances, as René believed he knew how to best handle his and Isabella's money and wanted complete control of their finances. Isabella confessed to her conflicts with René to the player and David Jones, and additionally spoke of how René even chastised her for spending $100 on groceries and often accused her of not knowing how to handle money.

Sometime prior to the case's events, however, Isabella came to a shocking revelation upon checking her and René's checking account: René had lost all of their retirement money in the stock market. Isabella confronted René in the dining hall of his university, with René becoming upset and asking Isabella to be more understanding. Enraged at René's condescending refusal to apologize, the evil Isabella grabbed a fork and began stabbing René in the neck, killing him. Later on, despite being shocked by her actions, Isabella disposed of René's glasses at the nearby viewpoint and left a message expressing her shock by what she'd done.

The evidence ultimately pointed to Isabella as René's killer, and she was confronted by the player and David. After initially trying to deny her actions, Isabella confessed, revealing how her husband had squandered their savings and protesting that she had not intended to kill René. After being arrested, Isabella was put on trial, with judge Judith Powell sentencing her to five years in prison. After her sentencing, Isabella broke down in tears and expressed heartache as she stated she wouldn't be able to enjoy her retirement now. 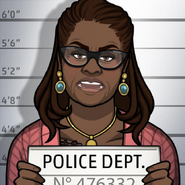 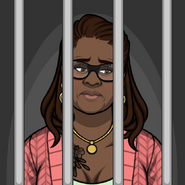 Add a photo to this gallery
Retrieved from "https://femalevillains.fandom.com/wiki/Isabella_Narcisse_(Criminal_Case)?oldid=140761"
Community content is available under CC-BY-SA unless otherwise noted.