The Female Villains Wiki
Register
Don't have an account?
Sign In
in: 1960s, Bondage Used By Villainess, Cape,
and 8 more

Iron Maiden was the villainess in T.H.U.N.D.E.R. Agents #1, 3-5 and Dynamo #1-4. Iron Maiden was one of the world's most renowned criminals who at one time worked for the Overlord.

She was romantically interested in one of the T.H.U.N.D.E.R. Agents Leonard Brown, a.k.a. Dynamo. She had captured him for the Warlord trying to force him to reveal the secrets of his Thunderbelt. However, he refused and proved able to resist her truth serum. Iron Maiden was impressed and became infatuated with him.

Dynamo reciprocated her feelings and mourned her when he thought she'd died after the battle with Dr. Death, but refused to be with her unless she gave up crime.  The two clashed several times afterward and once framed him as a traitor to force him to join her, but she also came to his aid against other villains a number of times. 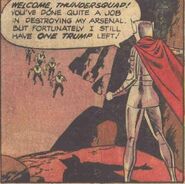