Iris Teleton is the wife of Oliver Teleton, and in the beginning of the episode, she is confronted by Oliver's mistress, Blanche Herbert. Blanche wanted Iris to divorce Oliver so they could marry, but Iris refuses, even though she doesn't really love Oliver. Blanche revealed that she had proof that Iris had been having an affair of her own, in the form of a letter Iris wrote to her lover. Iris promised to pay her off for the letter and divorce Oliver.

As she arrived home, Iris devised an evil plan to kill Blanche, taking Oliver's gun as she went to meet Blanche at her home, where construction was being done. Iris offered Blanche her jewels as a payment for the letter, but Blanche only tore the note in half and gave her one half; holding the other until she receives the rest of her payment. With the construction getting louder, the evil Iris unleashed her gun and pointed it at Blanche, and revealed that she planned to kill her and set up Oliver for the murder. Under the cover of the construction noises, Iris killed Blanche with a single shot, and then recovered the rest of the note and her jewels. She also placed Oliver's button from his blazer in Blanche's hand as part of her plan.

Iris arrived back home, only to hear Oliver on the phone with a private detective that he sent to track Iris. The villainess was shocked to hear not only that, but that the note that Blanche had was a copy, and Oliver had the original. Iris also learned that Oliver had a new mistress that he planned to marry, and after seeing the young woman, Iris was left defeated as her villainous plans had unraveled. 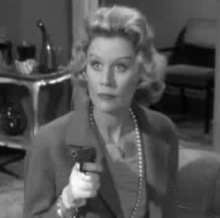 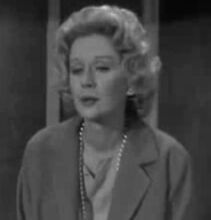 A defeated Iris after learning that her evil plans have failed
Add a photo to this gallery
Retrieved from "https://femalevillains.fandom.com/wiki/Iris_Teleton_(Alfred_Hitchcock_Presents)?oldid=115649"
Community content is available under CC-BY-SA unless otherwise noted.