Start a Wiki
watch 01:38
The Loop (TV)
Do you like this video?
Ilse Praeger (Barbro Hedstrom) is a minor villainess in the 1967 episode "Two Nazis for the Price of One" for the TV series "Hogan's Heroes".

Ilse is hired by Herman Freitag (Alan Oppenheimer), a Gestapo officer to help him get information from Col. Hogan (Bob Crane) about the Manhatttan Project.

We first see Ilse arrive at Freitag's office, and she is briefed about how he wants her to proceed with Hogan.  She makes a turn so Freitag can admire her stunning figure, and then proceeds to ask if he thinks the American Colonel will like her.  Freitag responds that if he doesn't, "everything I have heard about the American's is a lie".  He then lifted up her chin and said, "now Ilse, remember, I want you to be especially nice to Colonel Hogan.  You know what I mean?".

Ilse proceeds to turn and plant herself on the couch, showing off some seriously long legs.  We are also introduced to Freitag's aide Mannheim (Jon Cedar), who Freitag tells to stay out of the way.

Hogan enters the office with Col. Klink (Werner Klemperer), who Freitag ignores despite Klink's honor to meet him.  Hogan proceeds to tell him that it was him who led the secret bombing mission against his submarine base at Brennan.  Freitag, not knowing it was Hogan, hastily remembers the 9 submarines that were lost that day.

As Freitag fixes a drink, Hogan sits next to Ilse on the couch.  She makes conversation by saying, "I suppose you don't see many girls at the prison camp."  Hogan responds that the percentages are rather low.  Ilse then asks, "you must think about them alot".  Hogan tells her that they have this program of sports and pure thoughts".

Freitag then proceeds to tell Hogan that the "Gestapo and high command don't always see eye-to-eye.  So, if I knew of anyone who was operating say, a secret radio, or a secret tunnel perhaps....I wouldn't feel obliged to turn that man in". With that said, he tells Hogan, "All I ask in return for my silence is some information".  He wants to know about the Manhattan Project.  Hogan tells him that he knows nothing about it.  With that said, Freitag leaves the room to check on when dinner will be ready, thus leaving Ilse and Hogan alone on the couch.

After paying him several comments, Hogan leans in to kiss her.  However, Ilse turns away.  When Hogan asks if there is anything wrong, Ilse tells him that she normally doesn't like to talk about her troubles.  Then she proceeds to tell Hogan that it is Freitag, and that she can't stand him.  He is so mean to her.  Hogan notices that she has diamond bracelets on her arm, and tells her he thinks that these will help her bare the hardship.  Ilse tells Hogan that the diamonds were not from Freitag, that she got them from her mother.  Hogan, says, "Mom got around a little".

Ilse then leaned up to Hogan and told him, "I want to prove that I'm on your side".  She then warns that the information that Freitag wants, he will do anything to get it.  She then tells Hogan that he can make Freitag pay for it.  Hogan asks if she is talking money, and then continues, "now you're talking my language".  With that Freitag returns to the office and tells them that dinner will be ready shortly.  Freitag then aks, "where were we when I left".  Hogan responded, "No place, by I did pretty good after you left".  With that Ilse got up to go powder her nose.  This is the last we see of the lovely Ilse.  Freitag is later killed by his aide, Mannheim, and then Mannheim is arrested. 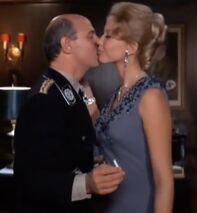 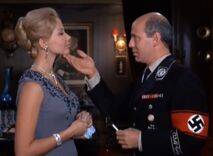 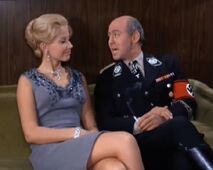 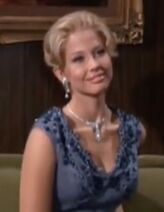 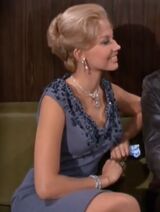 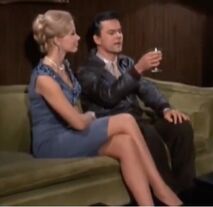 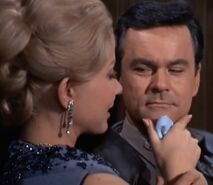 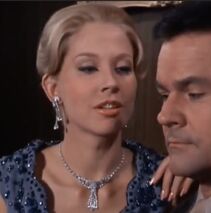 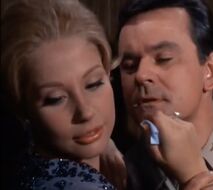 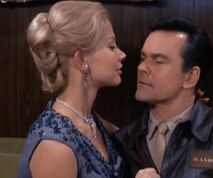 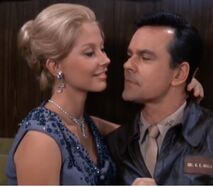 Add a photo to this gallery
Retrieved from "https://femalevillains.fandom.com/wiki/Ilse_Praeger_(Hogan%27s_Heroes)?oldid=65742"
Community content is available under CC-BY-SA unless otherwise noted.