Ilsa (Dyanne Thorne 1943-2020) is the attractive but brutal Nazi kommandant in the 1975 sexploitation film, "ILSA: SHE WOLF OF THE SS".  It was the first of four films in the line of Ilsa movies.

Ilsa is the kommandant at a Nazi death camp where prisoners are brought in for experiments.  Officially, the men are put to work in the yard, wheras the women are either sent to "serve" the soldiers or for medical research.  However, Ilsa and her equally blonde and lethal lieutenants Ingrid (Jo Jo Deville) and Maigret (Sandy Richman), run "medical" tests on her girl prisoners to prove that women can withstand pain as much as men.

At night she is like a black widow, having sex with male prisoners and then castrating them afterwards.  She is searching for the one man who can satisfy the insatiable Ilsa.

When an American prisoner named Wolfe (Gregory Knoph) comes along, Ilsa takes a liking to him, and decides not to castrate him.  Instead, she insists that he return to her often, and also has him have sex with her two guards while she watches.

The men and women prisoners plot an uprising to escape.  At the end, the prisoners capture and torture the guards before they eventually shoot them in the head.  Ilsa is bound and gagged on a bed in her black bra and panties from a previous sexual encounter.  One of the prisoners enters the room to kill her with a knife, and dies from the wounds she had encountered during the escape.  With the prisoner draped across her body, it seems that a German officer is about to untie her.  However, he pulls out a gun and shoots Ilsa in the head.  He later radio's headquarters and tells them that the camp has been destroyed so that the allies will be unable to tell what happened at the facility.  We see flames coming from the buildings as he drives off in his tank. 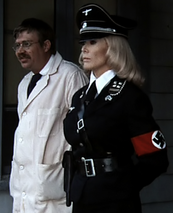 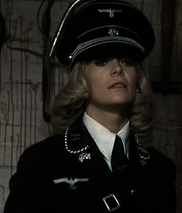 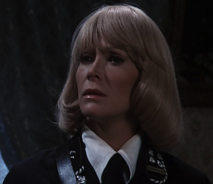 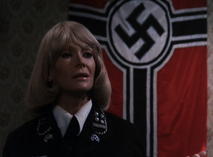 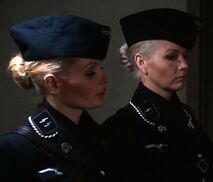 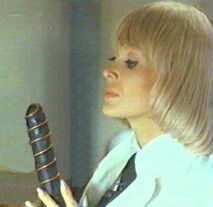 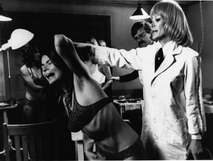 Add a photo to this gallery
Retrieved from "https://femalevillains.fandom.com/wiki/Ilsa_(Ilsa:_She_Wolf_of_the_SS)?oldid=198778"
Community content is available under CC-BY-SA unless otherwise noted.