Hypnotika (Nicole Sheridan) is a villainess from the 2001 short movie The Adventures Of O-Girl: Trapped In Time.

She has the power of hypnosis but wants to increase her ability by using a powerful artefact which will help her take over the world. She is also a collector of torture devices and frequently mentions how much pleasure it gives her to watch people struggle in them.

She it first seen with her minion Trance kidnapping a museum worker called Sarah Masterson, who can translate ancient languages. She needs Sarah to translate something which will help her unleash the power of an artefact so she can take over the world.

The heroine O-Girl follows a clue left at the scene of the kidnapping and goes to Hypnotika's lair where she is hypnotised with the artefact and made to lie down and placed into a lethal bondage trap which could kill her with excessive movement. Hypnotika enjoys her predicament for a while before leaving her to die.

But she doesn't die, and manages to escape and comes back for Hypnotika, much to the villainess' surprise. But a hypnotised Sarah Masterson attacks O-Girl and along with Trance they take O-Girl to another lethal death trap. This trap is a glass box with sand pouring in which will eventually drown the bound O-Girl when it gets above her head.

After taunting O-Girl about her situation Hypnotika and Trance leave to a different room to watch a monitor showing a live camera feed of O-Girl's impending doom. Hypnotika tells Trance how much she's enjoying watching O-Girl struggle, and seems to be getting stimulated by the sight as she starts rubbing herself.

Hypnotika then decides to leave to attend to other business, and tells Trance not to enjoy too much of the video feed as it would be more pleasurable if they were to watch it together later. Hypnotika then leaves, but on her return finds that O-Girl has escaped from her death trap thanks to the help of Sarah, who is no longer under a spell. O-Girl then uses the hypnotic artefact on Hypnotika and the story ends there. The narrator speculates how vindictive O-Girl would want to be with Hypnotika under her control. 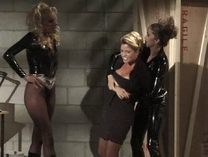 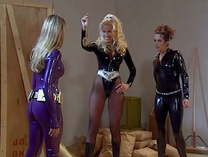 Using a powerful artefact to hypnotise the heroine O-Girl 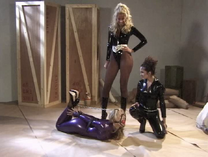 Enjoying the sight of a bound O-Girl at her feet 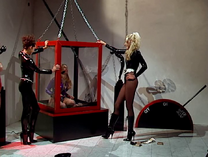 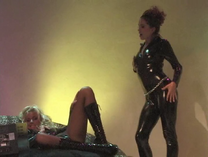 Sadistically watching O-Girl's impending doom on a monitor, touching herself as she watches 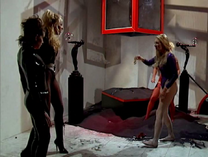 Hypnotised by O-Girl who uses the artefact on her
Add a photo to this gallery
Retrieved from "https://femalevillains.fandom.com/wiki/Hypnotika_(The_Adventures_Of_O-Girl)?oldid=209844"
Community content is available under CC-BY-SA unless otherwise noted.