Hulina (Anita Ekberg) is the villainess in the 1961 film, "THE MONGOLS".

A traitor to her own eastern European people, Hulina supports the invasion of the Mongol hoards in laying waste to the city of Kracow. Ruthless and power-hungry, she kills the Great Genghis Khan (Roldan Lupi) in his tent in hopes that her Mongol lover Ogatai (Jack Palance) will take over as the new Khan.

The natives fight back and trick the Mongol horsemen (including Hulina) to ride into a quicksand bog which they knew about. The dead Khan's son, Temugin (Gabriele Antonini), who knows of her murder of his father, watches in satisfaction. He is unwilling to lend a hand, as the treasonous murderess sinks slowly to her doom. 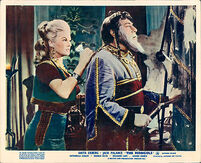 She stabs the Great Khan to death.

Hulina wants to be the queen of the next Khan. 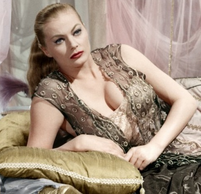 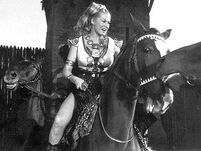 She rides with the Mongol hoards against her own native people.

The traitor sinks to her just reward.

Retrieved from "https://femalevillains.fandom.com/wiki/Hulina_(The_Mongols)?oldid=200257"
Community content is available under CC-BY-SA unless otherwise noted.