Start a Wiki
watch 01:38
The Loop (TV)
Do you like this video?
Honey O'Houlihan (Cheri Oteri) is the villainess of "The Catburglar", episode 2.10 of Dan Vs. (airdate March 31, 2012). She was the new neighbor of series protagonist Dan, and was introduced coming to Dan and asking for his help in finding her stolen cat. When asked by Dan why she was coming to him for help, Honey claimed she had seen Dan with his own cat Mr. Mumbles and believed he would understand how she felt.

Later on, though, Dan destroyed Honey's home while investigating her cat's disappearance, with an enraged Honey ordering him out of her house. When Dan returned home and found his own cat had been taken, he called the police and directed them to talk to Honey, only to find her house empty upon arriving, leading Dan to begin working with Chris to find Honey. The pair eventually tracked Honey down to the Eleanor Roosevelt hotel, with Dan confronting Honey in her room and accusing her of stealing Mr. Mumbles from him. Honey, however, responded by claiming that the true thief, notorious rare pet dealer "Frankie the Poacher", had approached her after seeing her get Dan's help and threatened to kill her if she didn't reject his help.

Honey suggested that she and Dan forget about Frankie and get new cats together, but Dan refused and Honey gaving helping him and Chris track down Frankie. Over the course of their investigation, Dan and Honey began to bond and seemed to form a romantic interest in each other. The trio eventually found Frankie's warehouse of stolen animals, with Honey using a pearl containing a sedative to knock out a henchman standing guard. Ultimately, Dan was able to save Honey's cat Poopsie and allow Honey to escape the warehouse, while he and Chris were imprisoned and nearly killed by Frankie's henchmen. But after Dan and Chris managed to evade Frankie and his henchmen and they were arrested, Dan learned the truth about his own cat's abduction: Honey had stolen her, with Frankie revealing that Honey had lied about Mr. Mumbles being a rare type of cat (the "rare breed" name she gave Dan was really a type of rocking chair).

After realizing the truth, Dan went to Honey's hotel room and confronted her, congratulating her on successfully deceiving him and asking her to return Mr. Mumbles. As Honey gave Dan his cat back, she went on to revealed that she had a history of stealing and selling rare cats, but promised that she wanted to give up her life of crime due to falling in love with Dan. But as she gave Dan a kiss, the evil Honey tried to sedate Dan with her pearl, only for the needle to miss due to Dan wearing Mr. Mumbles' bowl under his collar. Defeated, Honey grabbed Poopsie and fled the hotel room, subsequently being trampled by a marathon Chris' wife Elise was running in. The episode ended without revealing Honey's ultimate fate. 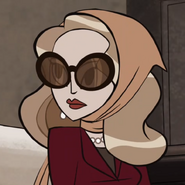 Honey after being trampled
Add a photo to this gallery
Retrieved from "https://femalevillains.fandom.com/wiki/Honey_O%27Houlihan_(Dan_Vs.)?oldid=184335"
Community content is available under CC-BY-SA unless otherwise noted.