Start a Wiki
watch 01:48
The Loop (TV)
Do you like this video?
Honey Bee is the villainous alter-ego of the evil Professor D'Evelyn from the cartoon Plastic Man, she appears in the 1979 episode Honey Bee. Plastic Man is a segmented show from the animated series The Plastic Man Comedy Adventure Show.

Honey Bee plans to use a heat missile to turn the world into a 'hot house' so that only she and her insects will survive. She is first seen as Professor D'Evelyn giving a presentation about how one day the insects will rule the world. The professor wears a smart suit with a long skirt that has a slit on the side. Suddenly, some of her bee henchmen appear and “kidnap” her, taking her on board of their ship. The professor takes this opportunity to switch into her Honey Bee outfit, an orange and black leotard with black boots, as well as a mask that covers her eyes and a blonde wig. When Plastic Man chases after the ship to try and save the professor, he is instead met by her evil alter-ego Honey Bee. Honey Bee knocks Plastic Man out by shooting a gas at him, which causes him to fall from the sky and land on some dangerous electric cables; although he is eventually rescued from the dangerous predicament he finds himself in.

Back at Honey Bee’s lair, she discusses her plan to create the ‘hot house’ with some engineers she has kidnapped and forced to work on the missile. Plastic Man follows the evil villainess back to her lair and tries to put a stop to her plans, but she launches the missile and makes her getaway in Plastic Man’s own aircraft. But Plastic Man saves the day by guiding the missile into the water and then later sneaks up behind Honey Bee as she’s flying the aircraft, and binds her with his long limbs. He unmasks her and discovers her true identity as Professor D'Evelyn and then arrests her. 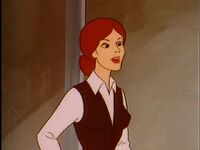 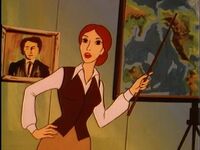 The professor giving a presentation... 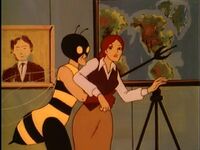 ...when she is suddenly "kidnapped" by Honey Bee's henchmen 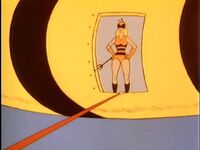 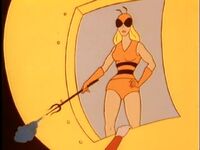 She knocks the hero out by firing gas at him 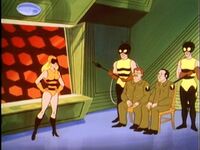 Back at her lair, with her subordinates and some kidnapped engineers 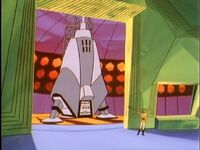 Showing off the missile she plans to unleash on the world 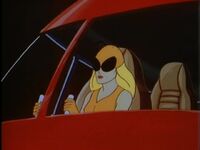 Plastic Man foils her plans so she tries to escape... 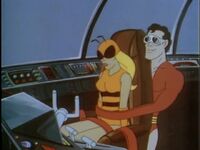 ...but our hero sneaks up from behind and binds her with his long limbs 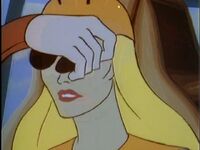 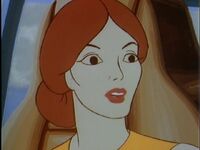 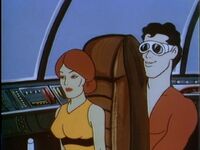 Professor D'Evelyn will be going to jail for her crimes
Add a photo to this gallery
Retrieved from "https://femalevillains.fandom.com/wiki/Honey_Bee_(Plastic_Man)?oldid=205037"
Community content is available under CC-BY-SA unless otherwise noted.