Hisame (ヒサメ, Hisame) is a missing-nin from Amegakure that appears in Mission: Protect the Waterfall Village! and its light novel adaptation.

Hisame is a young, quite tall, and slim kunoichi with fair skin, short light brown unkempt spikey hair, azure blue earrings, red lipstick, pupil-less black eye irises, short thin light brown eyebrows and wears a white hairband over her head, holding the hair out of the way from her eyes. She wore a pink tube top that has a dark red linen along with a open, light blue shirt, navy blue pants and ninja sandals. She wore her shuriken holster on her right leg.

She was noted to be one of the smartest kunoichi in Amegakure. Also, she could use Water Release: Water Whip to make a whip out of water which she could use to bind her opponent.

Hisame left her village behind to help Suien seek the Hero Waterin Takigakure. She assisted Murasame in taking down Sasuke Uchiha while Naruto Uzumaki pursued Shibuki. Hisame was defeated when Shibuki drank the Hero Water to fight back against Hisame and her fellow attackers. She was revealed to be alive in the novel and was also captured by Kakashi in the end. 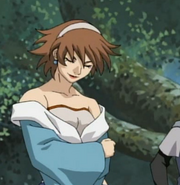 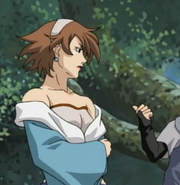 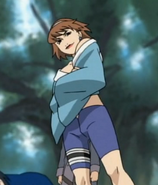 Add a photo to this gallery
Retrieved from "https://femalevillains.fandom.com/wiki/Hisame_(Naruto)?oldid=139178"
Community content is available under CC-BY-SA unless otherwise noted.