Hilda Tipton is the villainess of "All the King's Horses", case #49 of the crime solving game Criminal Case (release date November 28, 2013). She was originally born in England before moving to the fictional country of Sultanistan. There, she eventually became the royal nanny to Mohammad Souleyman, the son of Sultanistan's King, Khalid Souleyman.

But despite the hard work Hilda put in to become royal nanny, she was given little opportunity to provided guidance to Mohammad, with Khalid only allowing her to decide on what toys he should play with. Enraged, Hilda decided that she had to kill Khalid in order to properly consul Mohammad. Hilda used a trip Khalid was taking to Grimsborough to share a friendship speech with mayor Howard Johnson as her opportunity to commit the murder, throwing a firecracker into a beehive while Khalid was in the horse stables. The noise resulted in Khalid's horse (a gift from the Mayor) being frightened, resulting in the horse bludgeoning Khalid's head with its' hoove.

In the aftermath of Khalid's death, Hilda acted as an aide to Mohammad, even as he threatened to cancel oil trade between Sultanistan and the United States if his father's killer wasn't arrested in 24 hours. Eventually, the player and detective David Jones uncovered Hilda's guilt and confronted her as she was packing her luggage. Hilda eventually confessed, expressing her resentment of Khalid for (in her mind) not appreciating her. Hilda was arrested and, during her trial, the villainess expressed pride for her murderous actions, believing that Mohammad would make a better king of Sultanistan than Khalid and berating the player for ruining her plans for herself and Mohammad. After judge Olivia Hall chastised Hilda for her self-serving and callous actions, she informed Hilda that she'd fill out her reports and send her to be sentenced in International Court. 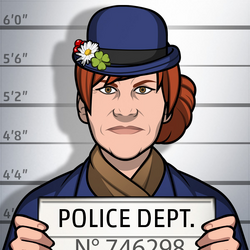 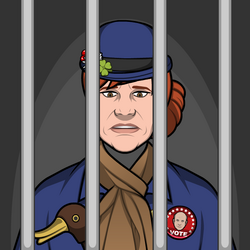 Add a photo to this gallery
Retrieved from "https://femalevillains.fandom.com/wiki/Hilda_Tipton_(Criminal_Case)?oldid=146166"
Community content is available under CC-BY-SA unless otherwise noted.