There are many lesser henchwomen in the 1996 comedy horror film "Satanic Yuppies" (aka. "Evil Ambitions").

Victoria ​(Amy Ballard) is perhaps the most active woman in the Inferno corporation aside from Brittany Drake (Amber Newman) and Tawny (Cari Minster).

Often paired with Victoria is Jamie (Stacey Sparks). At the climax of the film, the two are punished by Satan by being sucked into a vortex to Hell to be enrolled into his "frequent fryer" program, after they bungled up the task of obtaining a virgin to be his bride. 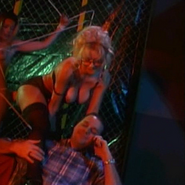 Add a photo to this gallery
Retrieved from "https://femalevillains.fandom.com/wiki/Henchwomen_(Satanic_Yuppies)?oldid=127550"
Community content is available under CC-BY-SA unless otherwise noted.