Helga Brandt (Karin Dor 1938-2017) is the helicopter pilot/henchwoman of the minor villain Mr. Osato in the 1967 James Bond film, YOU ONLY LIVE TWICE.

Helga works for Mr. Osato (Teru Shimada), the Japanese industrialist and member of the criminal organization SPECTRE. She is only an assistant who basically does all the hard and dirty tasks, and poses as a smiling and sexy secretary. She is a 28 year-old German woman, has mid-length red hair and a lot of blue eye-liner on her brown eyes. She is serious in her job but also likes to get some pleasure for herself sometimes, given she is a seductive single young woman. However, she always remains very devoted to her bosses, although her person and even her life have no importance to them.

We first see Helga when James Bond (Sean Connery) is posing as Mr. Fisher, the new managing director of Empire Chemical.  During this meeting with Mr. Osato, she is wearing a bright orange blouse and white high heels.  Mr. Osato introduces her as his secretary, who proceeds to offer Bond a glass of champagne.  Osato covertly x-rays Bond's chest which reveals his Walther PPK under his jacket.  Osato reprimands him for his nasty smoking habit, to which Helga adds, "Mr. Osato believes in a healthy chest", as she thrusts her breasts out toward him after serving the champagne.  Helga proceeds to take notes during the interview.  After 007 leaves, Osato orders her to kill him.  Not surprised by this order, she calmly uses the phone to arrange a car-load of assassins to intercept Bond outside, but the attempt fails.

Next we see Bond get captured while investigating the Ning-Po, a ship linked to Osato Chemicals, and he is taken aboard and brought to Helga's cabin.  There she is waiting on a couch with her sexy legs crossed, and dressed very seductively.  She is wearing a black slinky dress that appears more like a slip, with a sheer black semi-see-through shawl. Helga is also smoking a cigarette, proving that she doesn't practice what she preaches.

Helga is an expert torturer, but she apparently wants to have a little bit of pleasure during her job and spares Bond the violent interrogation when she attempts to seduce him.  She kisses him and 007 claims that he is an industrial spy. Helga sensually replies that she knows that (not knowing "Fisher" is James Bond) and keeps kissing and caressing him. Bond offers Helga $150,000 to help him escape back to Tokyo.  She refuses at first, stating that Osato would have her killed.  But being very horny, she cuts his bonds and Bond uses the blade to cut off her spaghetti straps on her dress.  The pair have sex there in the ship cabin.

Helga then pretends to be helping him flee in a small Meyers 200 plane, which she pilots.  She is wearing a leather flying helmet with goggles, flight jacket and pants.  She starts to apply lipstick on her lips while Bond is offering his protection from her bosses. However, she doesn't want to follow him anymore and decides to stay devoted to her employers. Her lipstick is explosive and she drops it to Bond, blocks Bond's arm with a wood plank and uses a parachute to get herself to safety, leaving Bond to die in the crash.  She then looks at the crashing plane with satisfaction, from her parachute, persuaded that Bond is going to die and that she has just succeeded her task. Unfortunately for her, Bond is able to break the plank and regain control of the aircraft.  He then lands safely and gets out of it before it explodes, unbeknownst to Helga who still thinks she has killed him.

The following day, Brandt is in the operations room of SPECTRE's volcanic launch site, where she assists in the capture of a Soviet spacecraft.  She is wearing a red blouse and skirt with purple heels.  Blofeld summons Osato and Number 11, which is another name for Helga.  They enter his lair, where Blofield immediately reprimands them for failing to recognize and kill Bond.  Both of them are perplexed due to the fact that they thought they had been successful in disposing of Bond.  Osato then shifts the whole blame to Brandt. Feeling she is going to be punished for the failure, Helga gets very nervous and tries to say it's not her fault but Osato's, but Blofeld reminds that he does not tolerate failure and bids Osato to leave. Blofeld never directly talks to her, and Osato only refers to her by her number, to show how insignificant she is to the organization. Osato is given a second chance, but Helga is going to pay a terrible price for her mistake. She implores Blofeld with her eyes hoping she won't have to endure any punishment, but Blofeld talks to her for the first time by nastily ordering her to leave. The ashamed Helga quickly lower her eyes and follows Osato, looking back to check if Blofeld is going to kill her, but it seems he isn’t. However, when the redhead seductress is following Osato across a metal bridge over the piranha pool, Blofeld presses a foot pedal which opens up the section of the bridge that Helga is walking on. Helga, terrified, slides down into the water, and seeing the piranhas converging on her, she screams with horror in her native tongue ("NEIN!!"), knowing she is doomed. As she is vainly screaming for Osato’s help, the hungry fishes attack, making short work of the sexy German secretary with their many sharp teeth. She is devoured alive in seconds, screaming with horrific pain as her pale flesh is stripped to the bones, and all Osato can do is look on in terror as his sexy assistant disappears forever under the violently churning water, knowing the poor girl has just paid with her life for his failure too. 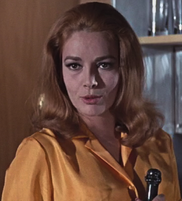 Helga meets Bond and offer him some champagne

The secretary mischievously implies she has a « healthy chest » herself 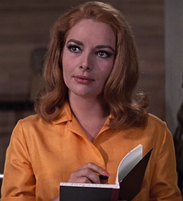 The devoted Helga takes notes for her boss

The redhead is about to kill him with a dermatome... 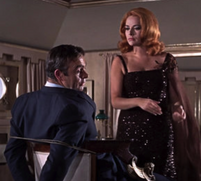 Helga slaps the bound Bond aboard the Ming Po...

But she is attracted to him as well... She knows she can’t, Osato would kill her !

But the young woman suddenly forgets her task, kiss 007 and moans with pleasure

A long and sensual kiss... 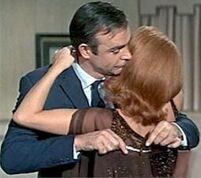 And it’s time to have sex !

a beautiful but evil killer!

After a night of pleasure, time for Helga to finish her job !

First, a quick beauty makeover on her lips to stay sexy...

And then trapping Bond and the plane with an explosive !

Helga then quickly escapes herself from this doomed plane 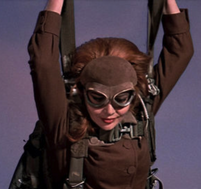 The girl looks at the crash with satisfaction

Her mission seems to be accomplished ! Osato won’t kill her, and she’ll probably be rewarded !

A few days later, Helga and Osato are called for report by the big Boss

Bond is still alive ! And Osato is pointing the full blame on her !

« You should have killed him yourself ! You had plenty of opportunities ! » 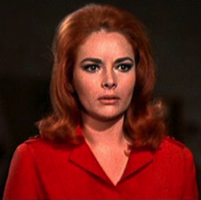 Terrified, Helga can’t speak but implore her boss to give her a last chance with her wide opened eyes... 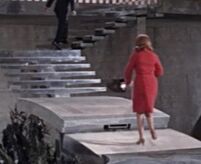 However, as she walks away, the bridge opens under her

The poor girl is gonna pay the price of her failure : a death by the piranhas ! 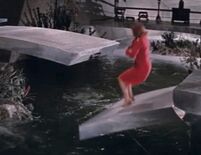 Helga falls and screams in terror

But the voracious fishes quickly starts to devoure the poor Helga !

Helga pays an extremely high price for her failure. She should have killed Bond right away in the Ning Po ! 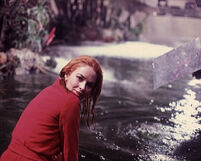 Karin Dor on the set after "Helga" has been eaten alive. 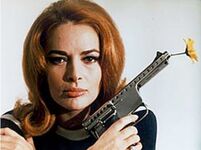 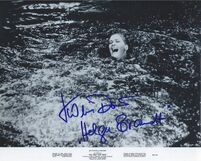 Autographed photo
Add a photo to this gallery
Retrieved from "https://femalevillains.fandom.com/wiki/Helga_Brandt_(You_Only_Live_Twice)?oldid=224506"
Community content is available under CC-BY-SA unless otherwise noted.