Helga (Ellen Dubin) is a secondary antagonist in the 1994 comedy film "Tammy and the T-Rex".

Helga is the lab assistant and sexual partner of Dr. Wachenstein (Terry Kiser).  Wachenstein's nerdy assistant Bobby (John Franklin) has brought to life a robotic dinosaur.  However, the doctor intends to implant a living human brain into the robot to give it consciousness, mobility and "immortality" to its already strength.

When they arrive at the hospital to find a patient, they find Michael (Paul Walker) who has recently been mauled by a lion in a wild Animal Park.  Michael is on life support and is being watched by his cheerleading girlfriend Tammy (Denise Richards).

Wachenstein and Helga come into the room and pretend to be the doctor and nurse on the case.  Helga unplugs the life support system, and Wachenstein attempts to provide chest thrusts.  Helga administers mouth to mouth, but shortly thereafter, they pronounce him dead.

Helga pulls the lifeless body of Michael onto a cart and rushes him out of the hosptial in attempt to get him to their lab.  Before loading him in their car, Michael regains consciousness, until Helga knocks him out with a punch to the jaw.

In the lab, Helga once again knocks Michael out when he recovers.  The doctor and his nurse saw off the top of Michael's head and remove his brain, and implant it into the Tyrannosaurus.  T-Rex with Michael's brain escapes and wreaks vengeance on his high school tormentors and is reunited with his sweetheart Tammy.

Tammy soon realizes the dinosaur is Michael and begins a search to find a more suitable body for him, Dr. Wachenstein is in hot pursuit of his monstrous creation which leads to a chase that ends with Michael killing the doctor.  Police officers open fire and destroy the mechanical dinosaur.  It is not shown, but it is assumed that Helga is taken into custody by the police.

Tammy manages to recover Michael's brain, in the end she takes it home with her and hooks his brain up to her computer, speakers and video camera which is temporary until they find a new body for him.  Through the set up Michael is able to speak and see, which allows him to view Tammy performing a striptease. This causes the brain hookups to spark. 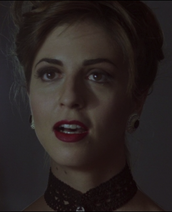 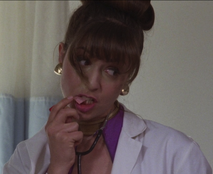 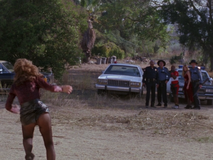 Add a photo to this gallery
Retrieved from "https://femalevillains.fandom.com/wiki/Helga_(Tammy_and_the_T-Rex)?oldid=214077"
Community content is available under CC-BY-SA unless otherwise noted.