Start a Wiki
watch 01:51
The Loop (TV)
Do you like this video?
Helen of Troy (Cathy Lee Crosby) is a femme Fatale in the 1975  episode "The Youth Killer", for the TV series, "Kolchak: The Night Stalker".

Reporter Karl Kolchak finds that centuries old Helen of Troy returns to drain the youth out of unsuspecting perfectly healthy young male victims.  She sacrifices them to the goddess Hecate, in her quest for immortality.  However, Helen was not only concerned with killing males, she aged Cynthia Tibbs, as she performed her nightly exercise rituals from her apartment balcony.  As she became old, Cynthia fell off the balcony to her death from fright.  Helen appears as Helen Surtees, who owns a computer generated love match business.

Kolchak nearly becomes a victim himself until he reveals to Helen that her last victim, who was supposed to be physically perfect, had a glass eye.  At the end Kolchak ironically remarks that Helen Of Troy has been given the punishment/gift of "eternal youth" she has been turned into a stone statue! 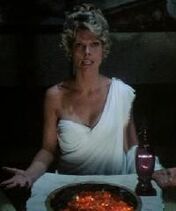 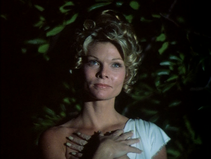 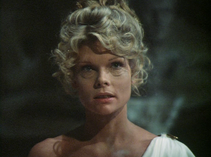 Add a photo to this gallery
Retrieved from "https://femalevillains.fandom.com/wiki/Helen_Of_Troy_(Kolchak:_The_Night_Stalker)?oldid=176365"
Community content is available under CC-BY-SA unless otherwise noted.