The Female Villains Wiki
Register
Don't have an account?
Sign In
Advertisement
in: 2000s, Alias, Attempted Murder,
and 16 more

Helen Delaney (A Trick of the Mind)

Helen Delaney, aka Lacey (Stacy Grant), is the hidden main villainess from the 2006 Lifetime film, A Trick of the Mind (alternately titled, Mind Games; airdate July 31, 2006).

Lacey was the longtime girlfriend of Mike Roper, and both of them had desires of escaping from their meager lives and becoming rich. The couple read about an auto accident that killed the parents of Jamie Ellison (the film's protagonist). Jamie herself survived the crash, but was injured. Jamie's father was the CEO of Ellison Realty, and with that knowledge, Lacey and Mike decided to plot to gain Jamie's wealth, which Jamie inherited due to the deaths of her parents.

Mike was introduced under the name Michael Radcliffe, and he quickly became Jamie's lover and eventual husband. Meanwhile, Lacey originally appeared as an ominous looking woman who pursued Jamie, but would disappear when Michael showed up. After this, Lacey finally introduced herself to Jamie as Helen Delaney, a private investigator who had been tracking Michael. Helen claimed that Michael had been married before to a woman named Charlotte Townsend, and that he killed her to gain his wealth. She warned Jamie to keep an eye on Michael, while also telling Jamie not to mention her to him. Helen appeared once again after Jamie was hospitalized after being drugged, and responded to Jamie's accusations towards her with more manipulation.

Helen appeared at Jamie's home after her near car accident (due to the brakes being tampered with) and handed Jamie a gun to use on Michael. As for Michael, Jamie's attempt to introduce Helen/Lacey to her husband was met with Michael claiming that he didn't see her, which was part of the couple's plan to depict Jamie as being insane. Jamie ended up institutionalized, returning to the same facility that she stayed in following her parents' deaths. Meanwhile, the couple got rid of the gun to continue the ruse.

Helen's villainous reveal began when Jamie visited Mike's mother after attending the reunion (where it was also revealed that Charlotte Townsend wasn't killed, and that she turned down Mike years ago). Jamie was shown a photo of Mike and Lacey together and realized that it was Helen all along, and following this, she confronted Mike about everything that was revealed to her. At that moment, the evil Helen appeared with a gun pointed at Jamie, cementing her reveal as Lacey. The couple admitted to their entire scheme, while Lacey stated that she had to speed up the plan due to Jamie's plan to donate her inheritance to charity. Lacey planned to kill Jamie and make it appear that she committed suicide, only for Jamie to claim that she was pregnant to play on Mike's emotions. The plan works, as Mike hesitates, much to Lacey's dismay. The greedy villainess fired a bullet at Jamie, only for Mike to take the bullet and end up dying in the process. An enraged Lacey then went after Jamie, but was thwarted when Josh Hagen arrived with the police to arrest her, who realized too late that Jamie had tricked her into thinking that she was pregnant, as well as the fact that Jamie had used her phone to record everything, including Lacey's evil nature and motive. All Lacey could do was growl in anger at Jamie for tricking her, as she was dragged away by the police to be sentenced for her evil crimes. 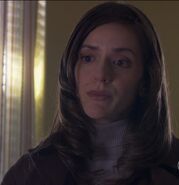 Helen's reveal as the villainous Lacey
Community content is available under CC-BY-SA unless otherwise noted.
Advertisement