Helen Blazes (Sylvia Lewis) is a villainess from Bedlam in Paradise, a Three Stooges short released on April 14, 1955.

The short is a remake of 1948's Heavenly Daze, which has Shemp dying and in Heaven meeting with his Uncle Mortimer, who was determining whether or not Shemp was eligible to remain in Heaven. Shemp was given the order to reform Moe and Larry back on Earth, with the promise that he could remain in Heaven permanently if he succeeds.

It was at that moment that the Devil appeared and sent the evil she-devil Helen Blazes to tempt Shemp. This led to Shemp and Helen dancing after the former was smitten by the demonic villainess. Helen works her seductive charms on Shemp and even plants a kiss on him, but Shemp regains his composure and sent the villainess away in defeat. 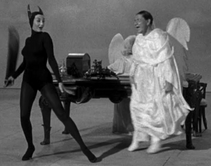 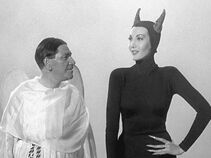 Add a photo to this gallery
Retrieved from "https://femalevillains.fandom.com/wiki/Helen_Blazes_(The_Three_Stooges)?oldid=110789"
Community content is available under CC-BY-SA unless otherwise noted.