The Female Villains Wiki
Register
Don't have an account?
Sign In
Advertisement
in: 2010s, Adaptational Evil Boost, Ambitious,
and 30 more

Hela Odinsdottir was the main villainess from the 2017 film, Thor: Ragnarok. She was the revealed first born offspring of Odin, and the older sister of Thor and Loki.

She was portrayed by the two-time Academy Award winning actress Cate Blanchett, who also played Lady Galadriel in the Middle Earth Saga, Irina Spalko in Indiana Jones and the Kingdom of the Crystal Skull, Marissa Wiegler in Hanna, Lady Tremaine in Cinderella, Penelope in Family Guy and will later voice Kaa in Mowgli.

Hela's backstory revealed that she served as Odin's strongest warrior -- Hela herself stated that she was the executioner. She stood by her father's side as he conquered the Nine Realms with bloodshed, killing many who stood in their path. At one point, Odin decided to become a more benevolent king and ruled with peace, which dismayed Hela. Hela planned to continue her megalomaniacal quest, which included killing all of the Valkyrie, except for one who escaped and went into hiding. Hela ended up banished by Odin, whose very presence kept her from returning.

Once Thor and Loki find Odin in Norway (with Doctor Strange's help), Odin revealed Hela's existence and her relation to the boys, while also revealing that he was dying. After Odin passed on, Hela broke free from her prison and introduced herself to her brothers, also expressing dismay in not seeing Odin die. Her power was displayed early on, as she not only caught Thor's hammer Mjølnir easily, but also destroyed it using only her hand. She later pursued Loki and Thor as they tried to escape using the Bifrost, and managed to banish them to the planet Sakaar, while she arrived in Asgard.

Shortly after arrival, Hela murdered both Volstagg and Fandral before taking on Skurge as her new ally. The Goddess of Death then introduced herself to Hogun and Einherjaras as the true heir to Asgard's throne, offering for them to become her allies. However, when they refused to join her side, Hela fought against and killed the entire crowd one by one, saving the vocal opposer for last. Hela later took Skurge back to the palace and became enraged over her past with Odin being covered up. She revealed her plan to again attempt to rule the Nine Realms, and as part of her plot, Hela used the Eternal Flame to resurrect the soldiers who fought with her, along with her pet wolf Fenris; after this, she dubbed Skurge her executioner. Hela planned to use the Bifrost in her villainous quest, but Heimdall stealing Hofund (the Asgardian sword that controlled the bridge) served as a flaw in her plans. When she went to an ancient Asgardian stronghold in an attempt to forcefully take Hofund for herself, Heimdall and the refugees had already fled.

Hela again encountered Thor after he escaped from Sakaar with Valkyrie and the Hulk, leading to another violent battle between the siblings, with Hela managing to slash Thor's right eye. She later took him to the ledge of the palace and continued to mock Thor, whose powers emerged in full force and subdued Hela, sending her falling from the palace. The ambitious villainess survived due to her presence on Asgard being the source of her power, leading to Thor realizing that the only way his older sister could be stopped is to allow for Ragnarök (the premonition of the destruction of Asgard) to happen. He sent Loki to place Surtur's crown in the Eternal Flame, which resurrected Surtur and restored him to full power. As Surtur plunged his sword into Asgard, killing Hela in the process, Thor escaped with Valkyrie, Hulk, Loki, and all of Asgard's people prior to its complete destruction. 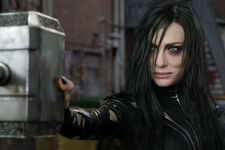 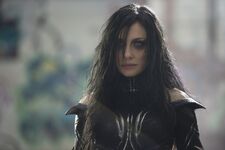