Start a Wiki
watch 01:51
The Loop (TV)
Do you like this video?
Hel (Suzi Lorraine) is the main villainess in the 2011 fantasy film "Kingdom of Gladiators".

Hel, is the diabolical Queen of Darkness. She is a sadist who loves to watch people die as they partake in sword fighting duels.

In an ancient world where magic is common and mighty Gladitor warrirors roam, King Wolfkahn (Bryan Murphy) is faced by merciless opponents has too make a big decision.  After ruling for many years, the mysterious demon reappears to the King at a Royal Tournament and claims his settlement, the lives of the courts descendants, and eventually the destruction of mankind.  The demon shows up to the tournament in the form of the Princess Luna, the King's missing daughter.  The King is forced to enter into a pact with the ancient demon to ensure his victory at all costs.

Only the bravest Gladiators known to man can save the world from ultimate distruction in a battle to the death.  Three powerful rival gladiators are chosen from the competitors to hunt down the demon, break his spell and protect the realm.  One of the gladiators, Teela, is played by pro wrestler Annie Social , who wears a skimpy chain mail bikini.

Hel is eventually stabbed with a sword and killed by Kayne (Leroy Kincaide), saving the kingdom. 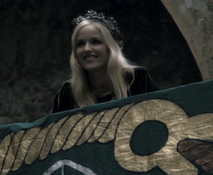 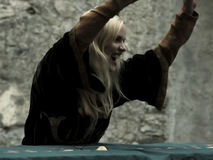 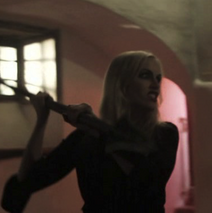 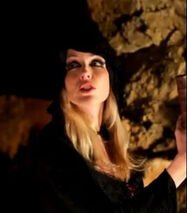 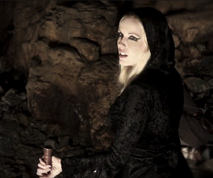 Add a photo to this gallery
Retrieved from "https://femalevillains.fandom.com/wiki/Hel_(Kingdom_of_Gladiators)?oldid=165289"
Community content is available under CC-BY-SA unless otherwise noted.