The Female Villains Wiki
Register
Don't have an account?
Sign In
in: 2010s, Animal Weapon, Anime Villainess,
and 16 more

Heine (Combatants will be Dispatched!)

View source
watch 01:28
Wiki Targeted (Entertainment)
Do you like this video?
Play Sound

Heine of the Flame (のハイネ, Haine) is a proud, evil demon commander in the Demon Lord’s army attempting to conquer the kingdom of Grace. She faces relentless defeat and humiliation at the hands of protagonist / undercover villain Six. Appears in Japanese ecchi series Combatants Will Be Dispatched! (戦闘員、派遣します！, Sentōin, Hakenshimasu!) anime and manga. Page info primarily based on anime storyline.

The evil Kisaragi Corporation is close to completing its goal of conquering Earth. They need to find additional worlds to invade, so the organization's most senior soldier killer, Combat Agent Six, reluctantly travels to another planet to survey it. Accompanying him is girl android Alice. Shortly after arriving in what initially appears to be a fantasy world, they find a golden opportunity to pretend to be righteous mercenaries for princess Tillis of the Kingdom of Grace while they carry out their villainy. That leads to them being in the same squad as a trio of female problem cases: Snow - an ambitious Knight-Commander, Rose - a Chimera who can gain powers from monsters by eating them, and Grimm - a curse-specializing archbishop. There's also a rival evil organization called “Demon Lord” that will have to be dispatched before invasion can begin. Six must amass Kisaragi evil points by conducting evil deeds to get weapons and earn his way back home.

Episode 2
Six’s newly formed team goes on their first mission to destroy the demon army’s supply line. While completing their mission, a beautiful demon woman riding a griffin swoops in proclaiming, “You’re in trouble now”. Six, ever the pervert, is impressed by her large breasts and her high-ranking attire (“You can sense my power. Not bad for a human.”). With haughty arrogance, she introduces herself as Heine of the Flame, one of the Demon Lord's ‘Elite Four’ generals. Seeing Six’s combat skills and lack of morals, Heine tries to convince him to join the Demon Lord’s Army, promising she’d put him in charge of the human prisoners (“You can take any woman you want as your slave.”).  She attacks Six, though trying not to kill him as he may yet prove useful (“Taste my power human scum.”). Alice wounds Heine's griffon, prompting Heine to depart the battlefield. 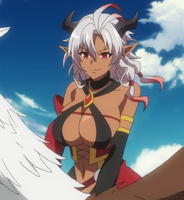 The beautiful demon swoops in on a battle Griffin

Shows off flame-based power before landing

“I’m Heine of the Flame, one of the Demon Lord's ‘Elite Four’” 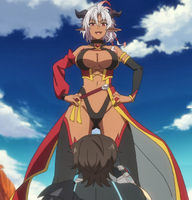 Tries to convince protagonist Six to join her demon army

"Taste the power of Heine"

Heine sics her Griffin on Six and laughs

Episode 4
Six's team plans a frontal assault on a Demon Army unit led by Heine. On the battlefield a supremely confident Heine is backed by her army and a new rock golem weapon. Six takes on the golem, while Snow goes to slay Heine. A smug Heine laughs off Snow before embarrassing her in battle, Six destroys the golem but is left unable to move due to his battle suits 3-minute cooldown period. Heine takes this opportunity to kill Six (“I’ll show you pity and strike you down with a single blow.”). She releases a flame blast, but the team protects Six. Heine builds up a larger flame blast to kill Six’s entire team. Grimm hits Heine with a paralyzing curse, and now she can’t move, as Six moves in to finish her off.

Luckily for Heine, the curse quickly wears off. She pivots to entice Six to join her side, but before Six can accept her offer, Snow attacks, cutting away the jewel Heine uses amplify her powers. It is a magicite stone that Heine spent years pouring power into and she anxiously stammers to get it back. Instead of killing the depowered Heine (which the team seems good with), Six takes advantage to humiliate and covertly use her to gain evil points. Heine is forced to pose for Six's salacious photo shoot in front of the two surviving armies. Snow laughs at Heine’s shameful predicament (“It feels so good to see a powerful foe fall!”). Six tells Heine he never promised to give her stone back (“You just assumed like an idiot and did what I said.”). Heine vows to kill Six, but he mocks her lack of power to do so. He puts stone in his underwear, telling her to come and get it. She angrily retreats without her magicite stone.

Smug Heine reacts to Snow's challenge to a fight

Heine fires up for battle

Heine tries to kill Six, but his team protects him

About to kill Six and his team

Heine is struck with a paralyzing curse

Six prepares to finish off the paralyzed Heine 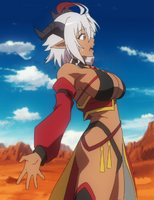 Heine's 'seduction' is interrupted by Snow …

Powerless Heine anxiously begs for her stone back

Heine's army watches in shock as their leader is disgraced

Heine has been duped as Six won’t give stone back

Episodes 5-6
Heine, along with Elite Four demon Gadalkand, is leading a full invasion force towards the kingdom of Grace. She vows to get revenge on Six, furious she was bested by a human and humiliated. Flying on her Griffin she spots a shiny object on the ground below. She lands to find it is her magicite stone. Suspicious, but overjoyed to get her precious stone and her full powers back, she reaches for it. Just to torture Heine (+ evil points), Six has set a booby trap landmine which blasts Heine and destroys her stone.

Heine is enraged when she reaches the capital with her army, craving to find Six and kill him. Heine encounters Grimm and cowers as Grimm threatens multiple curses, including one to blast off her breasts. The Elite Four demons fly up to the royal castle themselves to terminate the Princess, Six, and his team. Heine relishes the chance finally kill Six for what he’s done to her. The Elite Four attack, but Six uses his remaining evil points to call upon a magical buzzsaw weapon. He begins to chop up Gadalkand and the troops into little pieces in a berserker rage. A distraught horrified Heine looks on as her teammates are slaughtered - Six is saving her for last. After finishing off other Elite Four members, Six turns his attention to the whimpering Heine. Snow indifferently asks Six, “So, are you going to chop her up too?”. Six taunts Heine with death but decides to keep her alive, as long as she is still convenient to farm evil points. She is forced to accept a one-month truce with the Kingdom of Grace and retreats again in disgrace.

Heine leads the demon army to conquer the Kingdom of Grace

Finds her magicite stone in the desert, but Six has booby trapped it with a landmine 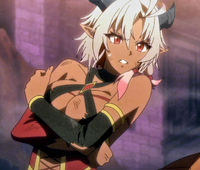 The demon Elite Four are nervous about Six's buzzsaw

Heine tells her teammates to run Six starts hacking them up

A horrified Heine watches as all her teammates are slaughtered

Heine is the only demon left alive after the carnage

Now it's her turn

The team considers chopping up Heine

Episode 8
Six and his team are on a diplomatic mission to Toris, a kingdom that exports "water stones" to Grace. While exploring the castle Six and Alice confront a young demon boy Russell of the Water, another of the Elite Four. As Six attacks Russell, Heine shows up and he immediately diverts his attention to tackling her. Heine attempts to explain her presence but is quickly handcuffed. Russel tries to intervene, but Six uses Heine as a human shield. Six decides to take advantage Heine, tickling her and groping her breasts (gaining evil points!). Explaining Russell and she are invited guests at the castle with immunity, Six continues to molest Heine a little longer anyway.

Heine is in Toris to gain water stones for the Demon Kingdom and prince Engel has agreed. The Kingdom of Grace also wants those stones, so Snow starts to seduce prince Engel to get him to change his mind. Heine then reluctantly attempts to seduce him as well. They both fail though, as Grimm has secretly put an impotence curse on Engel to screw with Heine.

Heine is tackled by Six 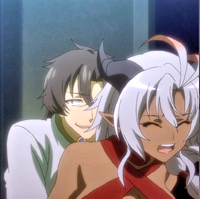 Six takes advantage of his prisoner of war

Heine is confused as her seduction fails

Light Novel 2: Heine teleports away from Six, but Six still manages to grab her top first.

Light novel 5: After the big battle, Six and his companions imprison Heine and mock and tease her.

Anime: Ongoing - fate not yet revealed.
Manga: Ongoing - Heine is last seen bound and gagged in the harsh wilderness, abandoned there by Six, who presumes she will be mauled to death by wild creatures. The team finds out, but they make no attempt to rescue her. [issue 33].
Light Novel: Demon Lord’s Army suffers an overwhelming defeat at the hands of the Kisaragi Corporation. Heine is enslaved at the Kisaragi base powerplant . They use her flames to heat water for the entire city [issue 5].

Heine (Combatants will be Dispatched!