Heather Fishman (Paula Patton) is the main villainess from the 2016 comedy, The Do-Over. She is the wife of Dr. Ronald Fishman, who was working with Butch Rager on a cancer treatment that could provide less side effects than chemotherapy. When a company that specializes in using chemotherapy attempted to buy him out, Ronald refused. Heather, however, did not, and she killed both her husband and Butch, who were later revealed to be same sex lovers.

Heather's encounter with protagonists Max and Charlie (who were posing as Butch and Ronny, respectively) came with they accidentally struck her with their vehicle. She pretended to help them find out the truth about Ronald and the formula for the drug, all while playing on Charlie's emotions. Heather's villainous revelation came to light when she encountered The Gymnast, who was torturing Max. She later phoned Charlie and lied about Max shooting and killing Shecky (The Gymnast actually did it), but once Charlie arrived, he quickly saw through Heather's deception. Heather later pulled a gun on Charlie, only for Max to arrive to take her down. She again attempted to kill both of them, while also boasting about killing her husband and Butch, but she would be attacked by Max's wife, Becca. The women engaged in a brawl that ended with Heather being knocked out. While her fate is not explicitly stated, it can be inferred that Heather was arrested. 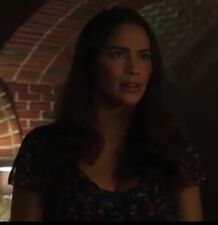 Heather pointing her gun at Max and Charlie

Heather after the attack of Becca

Retrieved from "https://femalevillains.fandom.com/wiki/Heather_Fishman_(The_Do-Over)?oldid=185764"
Community content is available under CC-BY-SA unless otherwise noted.