Heather Chandler (Melanie Field) is a main protagonist and villainess of the short-lived Heathers TV series. She was a student at Westerberg High School and, like her 1988 film counterpart, served as the cruel and tyrannical leader of her clique of friends; consisting of Heather Duke and McNamara and Veronica Sawyer (the series' main protagonist).

In the series' pilot, Heather was introduced lashing out at Ram Sweeney for wearing a Remington High Squaws jersey, accusing him of being racist and pointing out how fellow student Dylen Lutz was 1/16 First Nations; while hypocritically silencing Dylen when he expressed no offense over the jersey. Heather threatened Ram with posting about the jersey on social media if he didn't remove the shirt, and after Ram complied, forced him to sexually proposition student Jesus Julie. Despite Ram acquescing to her demands, however, Heather still posted about Ram later, angering Veronica when she saw.

With the two girls at an art exhibition show, Veronica blasted Heather's cruelty, which she claimed was done to teach Ram a lesson. Heather went on to claim Veronica as worthless before Veronica accidentally ruined her outfit, with Veronica responding to Heather's indignation by insulting her weight. Enraged, Heather furiously declared that she would destroy Veronica's life as revenge. Later that night, Veronica and Jason "J.D." Dean (a new student Veronica had taken a liking to) plotted to take a picture of a sleeping Heather wearing a Swastika hat in order to destroy her social media prowess, only for the plan to fail when Heather woke up and mocked Veronica while J.D. filmed her on her phone. In exchange for her phone, J.D. goaded Heather into eating a packet of corn nuts, having seemingly placed a vomit enducing pill in them. But when the pill instead killed Heather, J.D. realized he'd accidentally poisoned her with a German suicide pill.

While Veronica and J.D. managed to cover their tracks by staging Heather's death as a suicide using the video of her mocking Veronica, the pilot ended by revealing Heather had survived the poisoning, as the pill never broke open after she ingested it. After seeing the video of herself, Heather began to fume about Veronica before marvelling at how much attention her "suicide" had brought and proclaimed she was now famous.

Relishing in the fame she'd achieved through her supposed death, Heather went to Veronica and J.D. and revealed that she intended to remain "dead" for a while making her "comeback", blackmailing the pair into assisting in her plan by subtly threatening to report them for almost killing her. Heather revealed herself as still being alive to Duke and McNamara before crashing Betty Finn's memorial party at the local roller rink, where she made an impassioned speech claiming she would now become "the new face of suicide" and be there for all her fellow students.

Soon afterwards, however, Heather confronted McNamara on having tried to befriend Betty in her absence, while also accusing her of lying about being a lesbian (as she had been exposed for having an affair with teacher David Waters). Heather ousted McNamara from the group after claiming she was a traitor and liar and ordered her to take the bus the next day, with Heather's cruelty driving the already vulnerable McNamara to commit suicide. Unfazed by her former friend's death, Heather continued her self-serving campaign, while also forcing Duke to publicly break up with his boyfriend, Kurt Kelly, upset with Duke for hiding the relationship from her. Heather also took new student Lizzy Jackson under her wing to serve as assistance to her plans and replace Duke, having her do her makeup as she prepared to audition for Teenage Suicide: Don't Do It, a musical being produced by drama teacher Maurice Dennis. Heather's plan to win the role, however, was kiboshed when Lizzy began singing during Heather's rendition of Heaven is a Place on Earth, impressing Maurice into giving her the lead role in the musical. Heather went on to start her own brand dubbed "i am Suicide", only for that plan to be demolished when unpopular student Brianna Parker (better known by her cruel nickname "Trailer Parker") attempted suicide, resulting in her brand losing its popularity.

With Veronica, Duke, and Lizzy at her side, Heather confronted Brianna and bashed her for ruining her brand, while also ordering her to transfer schools. At that, Lizzy confronted Heather about how her brand was supposed to help people like Brianna, while chiding Heather for being a bully and telling her she was calling out injustice as she had been taught by Heather. Heather then confronted Veronica and ordered her to help her reinvigorate her campaign, and when Veronica refused, the villainess brought up her blackmail and responded to Veronica claiming it was too late to change her story now by revealing that she security footage of her and J.D. entering her house the night of her supposed death. After a failed attempt to have Duke destroy Lizzy in revenge, Heather attempted to blackmail J.D. into the act, with an initial resistant J.D. acquiescing after receiving anonymous threatening texts he believed to be from Heather and set Lizzy up to appear to have been trying to smuggle a gun into school, resulting in her expulsion.

After seeing Veronica had appeared to have been sent a video of the security footage by Heather, J.D. broke into her house with intent to kill her, with the evil Heather striking J.D. with one of her beauty pageant trophies before trying to burn him to death in her tanning bed and later with a lighter and hairspray can. J.D. eventually got Heather in a chokehold, during which she revealed that she hadn't been texting him, leading to the reveal that Veronica was sending the texts due to being angry at J.D. for kissing Betty Finn during his attempt at killing her.

Following the opening of the musical, however, Heather's popularity took a hit when Duke (having been using the school's new program, Westerburg Considered, in a bid to destroy Heather) taunted Heather about social media star Amita disliking the show and claiming she was worthless outside of Westerburg and a hypocrite in regards to her claims of body positivity. Heather appeared to prove Duke wrong by eating several cupcakes at the dessert table, only to throw up in the bathroom.

Despite her dismay, Heather continued her cruel streak by dismissing Brianna's attempt to comfort her and compliment her performance, and after seeing Duke claim on Westerburg Considered (renamed Hellscape by Duke) that there was Occult imagery in the musical and that it should be shut down, the scorned bully retaliated by striking Duke with her car. As punishment, Heather's car was confiscated by her mother Martha and she was forced (much to her dismay) to begin taking the bus to school. The 8th episode, "Do I Look Like Mother Teresa?", opened with Heather having a fantasy where she sat down with four other versions of herself, with the sole benevolent version of herself informing Heather that her problems were a result of her being a bad person and that she needed to make amends to those she hurt to improve things. Heather went about doing so by apologizing to several people she'd hurt, only for her attempt to make amends to Duke failing due to Duke believing her change to be fake while chiding her for not remembering McNamara's first posthumous birthday.

Heather's apology to Brianna resulted in the two going out to eat at McNamara's favorite Mexican restaurant Gondola's, with Heather being touched by Brianna claiming that Heather's belief that she was better than everyone else was accurate. Heather also learned from Brianna that Duke (who was genderqueer) had previously starred in an ad for conversion therapy in Guatemala, and while she was initially against using the ad against Duke due to her efforts to be nicer, receiving an insulting text from Duke spurned Heather to revert back to her old ways and send the footage to Duke. The following episode, "Call Us When the Shuttle Lands", has Heather confronting Duke and Veronice when they were locked in a classroom during an active shooter drill, with her and Duke making up before deciding to read Veronica's diary after she blasted them both for their shallow and self-centered natures.

After learning from Veronica's diary that she was responsible for the murder of Lucy Lisanne McCord when she was a child, she and Duke were initially shocked, with Heather chiding Veronica for being a hypocrite while Duke (much to Heather's bewilderment) about Veronica getting away with murder. Duke then accused Heather of killing McNamara when she chided Duke for gushing over Veronica's actions, with Heather in turn blaming Duke for posting the photo of McNamara and Waters online and later insinuated that she believed Veronica and J.D. actually killed McNamara and staged her death as a suicide. After learning that J.D. hadn't asked Veronica to Prom, Heather suggested they all go to Prom together, revealing she and Duke didn't plan to report her to the police and referring to Veronica as "her monster" as justification before freeing Veronica from having been tied to a chair by Duke.

The trio having reunited, Heather and her cohorts went to Pauline Fleming and revealed they wanted to plan the entire Prom themselves. Following Kurt's supposed suicide (he was actually murdered by J.D. after he caught him putting explosives in the school boiler room in preparation of killing everyone at Prom), however, Heather showed her true colors again by callously dismissing his death and later began petitioning to cancel Prom after learning Veronica had a strong chance of winning Prom Queen. After her petition was successful, J.D. angrily ordered Heather to uncancel the event, with Heather (believing J.D. was simply attempting to win Veronica back) stating that Veronica had wisened up about him and regarded him as meaningless, while also boasting that it would her, not J.D., who Veronica would always turn to.

After Duke was manipulated by J.D. into getting Prom back, Heather angrily confronted Duke, who mocked Heather for her past failings on the beauty pageant scene while boasting about intending to usurp Heather's reign of power over Westerberg. Following Duke's murder at the hands of J.D., Heather initially appeared devastated and agreed with Veronica not to go to Prom, only to immediately renege after learning she was now considered top candidate for Prom Queen; a decision that was admonished by Veronica, to which Heather claimed she would do the same thing in her position. The cimax of the season finale, "Are We Going to Prom or Hell?" had Veronica attempting to warn the staff about J.D.'s murderous plot, only to be stopped when Heather blasted her for wearing red against her demand, later going into a tirade claiming she had influence over everyone at Westerburg, Veronica included, while also callously mocking McNamara's suicide.

Convinced by Heather's words, Veronica turned heel by deciding to go along with J.D.'s plan, with the two killing each other in a shoot-out over J.D.'s attempt to stop the explosion after learning of a nearby school's Prom being attacked by a mass shooter. Veronica managed to restart the timer before dying, and while most of the students perished in the ensuing explosion, Heather was the sole surviving student due to being in the midst of being ejected from Prom for changing into a shorter dress. While Heather initially seemed devastated by the tragedy, she quickly expressed happiness at being interviewed as the sole survivor of the bombing, dubbing her next planned campaign, "i am Mass Suicide". However, the interview was cut short when Heather refused to discuss the rumor that Veronica was the mastermind behind the bombing, fuming at the news reporter's statements revealing that Veronica would be the focus of the story rather than herself. 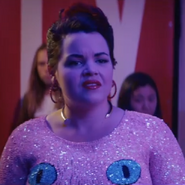 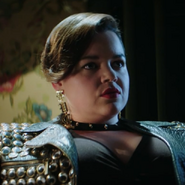 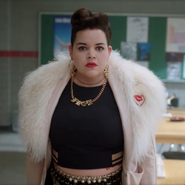 Add a photo to this gallery
Retrieved from "https://femalevillains.fandom.com/wiki/Heather_Chandler_(Heathers_2018)?oldid=185914"
Community content is available under CC-BY-SA unless otherwise noted.