Start a Wiki
watch 00:17
The Loop (TV)
Do you like this video?
Heather aka 84 (Sophie Turner) is a hidden villainess from the 2015 film Barely Lethal. She was one of many trained teenage assassins as Prescott Academy, a school that catered to teaching orphaned girls to be assassins. Her slight backstory revealed she was also in an intense rivalry with fellow agent 83 (the film's main protagonist).

The film's events opened with Prescott's lead trainer Hardman assigning 83 the job of bringing in notorious arms dealer Victoria Knox, much to 84's anger due to 83's increased desire to live life as a normal teenager. After the mission resulted in 83 faking her death and going MIA to attend high school under the alias Megan Walsh, 84 worked with Hardman to look for her, with 84 taking the name Heather and intergrating herself into Megan's friend group.

After seeing Heather at a party flirting with her new boyfriend, Cash Fenton, Megan become angry and confronts Heather in the bathroom, only for her nemesis to taunt her before leaving after spraying her in the face with perfume. While Heather claimed she had been sent by Hardman to keep an eye on Megan after they discovered she was alive and to pull Megan from the high school, a car chase involved Megan and Liz Larson (the daughter of the family Megan was staying with under the guise of a student exchange program) that left Liz injured, Megan recognizing the smell of a perfume left in the assailant's car led to a realization: Heather was actually a double agent for Victoria, with Hardman revealing to Megan after she called him to inform him about Heather's heel turn by revealing he hadn't sent her to tail Megan and had even thought she was killed during Victoria's escape from prison.

In the film's climax, Heather surprised Megan when she arrived at the school's Homecoming dance as the date of her friend Roger Marcus, getting into a brawl with her former fellow agent. During the scuffle, Heather revealed that learning of Megan's faked death was "the worst day of her life", as she had always wanted to kill Megan herself. Their fight went out into the hallway, with the girls trading insults before their fight went to the school kitchen, where Heather went into detail about her allegiance with Victoria as Megan hid from her. While arming herself with a knife, Heather explained that Victoria gave her a better deal than Hardman and how they'd made a deal with each other that Victoria would kill the Larson family while she got to kill Megan as she'd always wanted.

After also boasting about kissing both Cash and Roger, the evil Heather went to attack Megan with the knife, only for Liz to surprise the villainess by stabbing her in the leg with a corn dog stick. Megan uses this distraction to clock Heather with a frying pan, knocking her unconscious and allowing her and Liz to go rescue Liz's mother and younger brother Parker, who were being held hostage by Victoria and her henchmen. While the film ended with Victoria re-arrested, a post credits scene showed Heather in a car with one of her boss's minions, demanding him to find out where Megan was going to college as she stared at a picture of her enemy on a tablet. 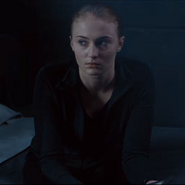 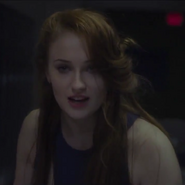 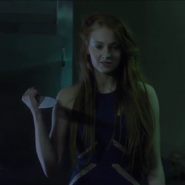 Add a photo to this gallery
Retrieved from "https://femalevillains.fandom.com/wiki/Heather_(Barely_Lethal)?oldid=207732"
Community content is available under CC-BY-SA unless otherwise noted.