Havok is a professional wrestler best known for competing in TNA, where she portrayed a villainess.

Havok first appeared for TNA at Knockouts Knockdown 2 on May 10, 2014, losing to Madison Rayne. Havok made her villainous debut on September 3 and attacked Gail Kim and Taryn Terrell after their Knockouts Championship match; cackling evilly after assaulting the pair. A week after her debut, the evil Havok again attacked Gail as well as Brittany, and later walked away with Gail's Knockouts Championship. On September 24, Havok won a #1 Contender's Battle Royal and received her title shot a week later. Before their match, Havok viciously attacked Gail and separated her shoulder. At Gail's insistence, the match went on as scheduled, resulting in Havok defeating Gail to capture the Knockouts Championship. During her reign as champion, Havok successfully defended the title against Gail, Velvet Sky, and Madison Rayne, before she lost the title to Taryn Terrell on November 19.

Havok resurfaced on the January 7, 2015 episode of Impact Wrestling, participating in a battle royal for the Knockouts Championship, only to be eliminated by Taryn Terrell. Havok's last feud in TNA was with Awesome Kong, and it ended with Havok losing to Kong in a cage match at Lockdown. 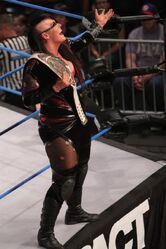 Havok as Knockouts Champion
Add a photo to this gallery
Retrieved from "https://femalevillains.fandom.com/wiki/Havok_(TNA)?oldid=98729"
Community content is available under CC-BY-SA unless otherwise noted.