Start a Wiki
watch 01:51
The Loop (TV)
Do you like this video?
Haruka Tendo (Kae Araki) is the villainess of "A Friendship That Can't Be Bought", episodes 12.14 and 12.15 of Case Closed (airdates July 28 and August 4, 2003). She was a college student and a member of an Outdoor Club with three of her classmates: Reiji Fukuura (who was also Haruka's boyfriend), Yasumi Shirafuji, and Takuto Meshiai.

While Haruka claimed to be the daughter of a wealthy family, the episode's events revealed the truth: she actually came from a lower class background, only pretending to be rich in order to make friends. Upon joining the Outdoor Club, Haruka began striving to maintain her wealthy persona, even taking out loans to continue her charade. Prior to the episode's events, however, Haruka overheard Yasumi telling Reiji and Takuto how she'd come to realize Haruka wasn't really rich. Haruka was also devastated to hear the three agree to keep their knowledge of her lie a secret so they could keep letting her provide money to their club, with Reiji even revealing his intention to break up with Haruka after graduation. Takuto was the only who suggested that Yasumi should confront Haruka with the truth, but it didn't seem that he was willing to do it himself.

Haruka's heartache soon turned to rage, and she plotted to kill Yasumi while the Outdoor Club was on a camping excursion and frame Reiji. Haruka went about killing Yasumi by asking her to clean the sunroof of the camping RV they were using for their trip, allowing her to bludgeon Yasumi to death with a rock. Haruka then used a knotted string on Yasumi's belt to keep her on the roof of the RV, shutting it in the sunroof door and covering Yasumi's body with a plastic sheet to reduce friction. During the gang's ride up a mountain to view a fireworks show (which they were going to with Conan Edogawa, Hiroshi Agasa, and Conan's friends), Haruka asked Reiji to open the sunroof, allowing for Yasumi's body to fall from the roof. Haruka's actions initially made it appear that Yasumi died in a biking accident, and later made it appear that Reiji was responsible for killing her due to opening the sunroof. But Conan was able to deduce the truth after seeing a line of blood on the sunroof door and discovering the blood-stained plastic sheet, having Agasa mimic his summation to the group.

The final piece of evidence against Haruka, however, was her hasty way of changing clothes after killing Yasumi, as it was noticed that her belt wasn't properly fastened into her pants' waist loops. Caught, Haruka confessed to killing Yasumi, while also blasting Reiji for his own actions and proclaiming she'd actually begun to believe they were actually friends and killed Yasumi for destroying their friendship. Haruka's claim was refuted by Ayumi Yoshida and Ai Haibara, with both girls concurring that Haruka and her club members had never actually been friends and that she couldn't use money to win people over, leading Haruka to break down in tears. Haruka was then arrested (off-screen) for killing Yasumi. 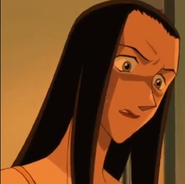 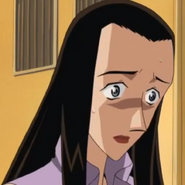 Haruka during her villainous reveal
Add a photo to this gallery
Retrieved from "https://femalevillains.fandom.com/wiki/Haruka_Tendo_(Case_Closed)?oldid=135011"
Community content is available under CC-BY-SA unless otherwise noted.