Start a Wiki
watch 01:51
The Loop (TV)
Do you like this video?
Harriet (Lindsay Hartley) is a secondary antagonist in the 2010 episode "Abandoned" for the TV series "Smallville".

Harriet was presumably human, but had a claw located on her right armt that was powered by kryptonite.  She was the appointed leader of the Female Furies.  She was trained by Granny Goodness in combat.  Harriet herself, does not have super strenth, her claws are the source of her strength, dexterity and invulnerability.  Kryptonite also seems to make the claws sharper.  They can become so sharp that they glow Green K radiation.

Harriet was able to subdue Clark Kent when he was weakened by kryptonite.  She and the other Furies subdued Clark.  However, once the kryptonite was no longer a threat to Clark neither were the Furies.  She was later defeated in hand to hand combat by Tess Mercer at the end of the episode.  She was thrown through a glass panel and knocked unconscious. 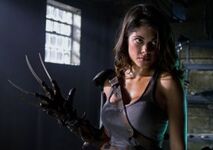 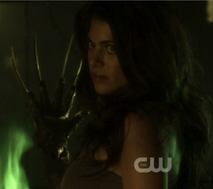 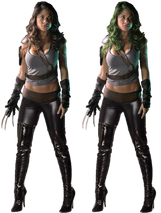 Add a photo to this gallery
Retrieved from "https://femalevillains.fandom.com/wiki/Harriet_(Smallville)?oldid=169075"
Community content is available under CC-BY-SA unless otherwise noted.