Start a Wiki
watch 01:50
The Loop (TV)
Do you like this video?
Harper Hayes (Jeananne Goossen) is the main villainess from "Skull + Electromagnet," episode 2.05 of MacGyver (airdate October 27, 2017). She is a former top operative for the CIA's Special Activities Division, only to become a villainous traitoress working with terrorists, mercenaries, and arms dealers.

In the beginning of the episode, Harper was shown in a plane hovering over the Bermuda Triangle; shackled up and in the custody of a group led by Commander Bryan Wheeler, son of the Vice President. At that moment, the villainess dug a pin from inside her right arm and freed herself from the cuffs; after which she took out the group and caused the plane to crash in the Triangle, killing seven people on board, with herself and Wheeler surviving. The case brought MacGyver and company to the Triangle (despite Jack's trepidations) in search of Wheeler and Harper--the latter whose identity was unknown to the group until Riley got the intel from Matty Webber.

Later on, the evil Harper caught Samantha Cage and trapped her inside a tank that was slowly filling with water, planning to kill her. She later went on a search for Wheeler, as she was planning to sell him to her cohorts. Jack found Wheeler gagged and tied up, and it was at that moment that Harper appeared and shot Jack, causing him to fall off the cliff, but survive. Seeing that Jack survived, Harper searched for him, while detailing her evil plan for Wheeler. Just as she was about to fire at Jack, she was suddenly subdued by MacGyver's makeshift electromagnet, which attracted Harper's metal plate and other metal parts inside her body. At episode's end, Harper was again shackled and taken back into custody, while also snidely accepting Cage's threat of payback against her. 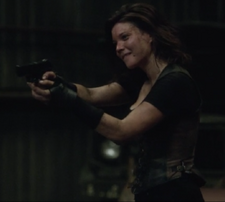 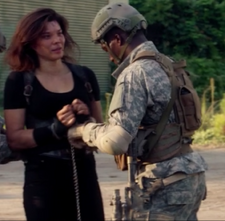 Harper Hayes' arrest
Add a photo to this gallery
Retrieved from "https://femalevillains.fandom.com/wiki/Harper_Hayes_(MacGyver)?oldid=185038"
Community content is available under CC-BY-SA unless otherwise noted.