She was the Joker's former henchwoman, girlfriend. and staple sidekick to the Joker in all forms of Batman media (although Joker was highly abusive, she remains largely the same and this did not stop Harley from later seeking revenge after his death). After Joker's illness and death, Harley takes over his gang along with many of his other responsibilities.

She is voiced by Arleen Sorkin in Arkham Asylum, Tara Strong in Arkham City, Arkham Origins, and Arkham Knight, and by Hynden Walch in Batman: Assault on Arkham. 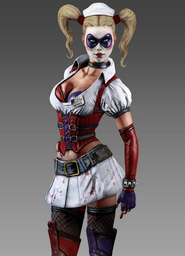 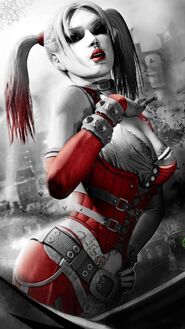 Game over...
Add a photo to this gallery
Retrieved from "https://femalevillains.fandom.com/wiki/Harley_Quinn_(Batman:_Arkham)?oldid=158593"
Community content is available under CC-BY-SA unless otherwise noted.