Hannah (played by Teresa Gimpera) is the villainess for the 1973 Spanish horror film Hannah, Queen of the Vampires. originally entitled La tumba de la isla maldita and also known as Crypt of the Living Dead.

Hannah is a 13th-century vampire whose tomb is opened by an archaeologist Chris Bolton who has visited Vampire Island to bury his father. He does this despite the warnings of a local schoolteacher named Mary. Mary's brother, Peter is a student doing research on the Crusades.

We learn that Hannah was the fiance of King Louis VII. While Louis was on a conquest of orient lands for Christendom, they were shipwrecked on an island. It was here that Hannah became a vampire, and Louis was forced to seal her alive in the tomb.

Initially, Hannah is too weak to kill by herself and she sends out her pet werewolf to bring back the blood of superstitious villagers. Once she has more strength, she endangers the island-population herself, including Mary the teacher, who she intends to sacrifice. Hannah has the ability to turn into a cloud of mist or a wolf.

Hannah's death at the end of the film is unique, when Chris throws a burning lantern at her feet. The lantern catches her gown on fire, and she lights up. Hannah then falls over the edge of a cliff to what seems would be her death. However, when the villagers go down to recover her body, she gets back up. Her badly burned face and body is surrounded by the villagers. Chris finally throws a wooden stake through her heart. The next morning, we see Chris and Mary watch as they bury Hannah's body in the ground. However, we then see a little boy run across to an abandoned castle where he lets a girl know that he did what she asked him to do. Then the girl opens her mouth revealing the fangs of a vampire. 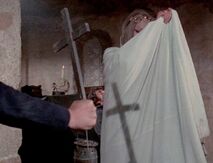 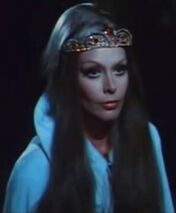 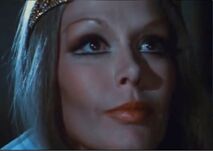 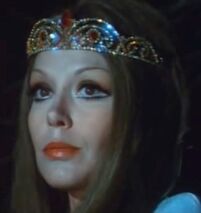 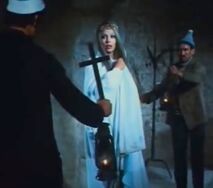 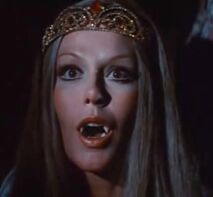 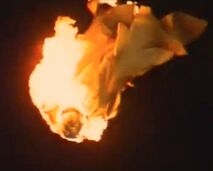 Add a photo to this gallery
Retrieved from "https://femalevillains.fandom.com/wiki/Hannah_(Hannah,_Queen_of_the_Vampires)?oldid=197330"
Community content is available under CC-BY-SA unless otherwise noted.