Start a Wiki
watch 01:51
The Loop (TV)
Do you like this video?
Hania is professional wrestler currently competing as a villainess in Impact Wrestling, and is best known for her heel role while competing for Women Superstars Uncensored,

Hania began her WSU stint in 2012 as a masked wrestler named Saturyne, but she would begin competing as Hania at the Blood and Thunder event in October 2013, where she defeated Cherry Bomb. She would lose back-to-back matches to Jenny Rose, and it was during a series of matches against Athena that Hania's villainous persona began to emerge. Hania lost the first match to Athena at Resurgence in September of 2014, but she would win the rematch at Breaking Barriers III on November 8.

A TLC rubber match took place between the two at WSU's 8th Anniversary Show on February 21, 2015, and during the match, Hania became hellbent on destroying Athena. Despite this, Hania was defeated by Athena, and after the match, the two women embraced each other in a show of respect. Once Athena's back was turned, Hania attacked Athena with a steel chair and verbally snarled at the fans in attendance, while leaving the ring as a villainess.

Hania explained her villainous turn at WSU's Power event on May 9 before she was confronted by Athena. Later in the event, Hania competed against Brittany Blake in the first round of the Spirit Championship Tournament. Hania laughed evilly as she viciously decimated Brittany to show off her new heel persona, even preferring to continue destroying Brittany instead of defeating her. While Hania was arguing with the official, she was rolled up and pinned by Brittany, and left furious after the loss. Hania ended up replacing Allysin Kay as Brittany's opponent in the semifinals at Control, defeating Brittany to advance to the finals later in the event, where she was defeated by Leva Bates.

After defeating Tessa Blanchard at Excellence II, Hania interfered in Athena's match against Sumie Sakai, which led to a final grudge match to end their feud. Hania defeated Athena in the main event via disqualification. At the 9th Anniversary Show in February 2016, Hania failed to dethrone Leva Bates as Spirit Champion.

In August of 2017, Hania signed with Impact Wrestling after years of competing on the independent circuit. Hania debuted as a villainess on the January 18, 2018 edition of Impact, doing so by coming from the crowd and assaulting Rosemary. Rosemary had defeated KC Spinelli and gave a promo regarding going after the Knockouts Championship, but shortly afterwards, the evil Hania attacked Rosemary from behind, while proclaiming that no one could stop her. The villainess continued her assault as the segment progressed, which ended with Hania driving Rosemary down on the steel steps. 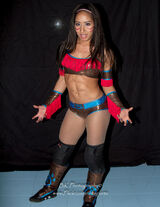 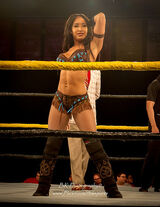 Add a photo to this gallery
Retrieved from "https://femalevillains.fandom.com/wiki/Hania_(WSU)?oldid=98728"
Community content is available under CC-BY-SA unless otherwise noted.