Hana Novak (Nansi Nsue) was the secondary villainess of "The Czech List," the second episode of Whiskey Cavalier (airdate March 6, 2019).

Hana was introduced as an assassin who served as an obstacle in Will Chase and Frankie Trowbridge's pursuit of notorious smuggler Stavros Pappas. It was during their chase that she appeared and shot Stavros to death, though Frankie managed to copy his retinal scan—which the group needed to obtain a ledger that contained a list of his criminal clients.

However, the group was informed that they also needed the scan from Stavros' wife turned widow Karen, leading to Will being sent as a "honey trap" for her in Prague. Hana tracked Will and Karen down during their arranged dinner date, during which she threatened the former with a gun. This led to him subduing her and her fellow assassins (with Frankie's help) before he and his date escaped the scene.

On the following day, Hana and her henchmen ordered Will, Frankie, and Karen to retrieve the ledger at gunpoint—after which the last of the trio took said ledger and revealed herself to be in league with Hana, who was her mistress. The villainous couple escaped and left Will and Frankie to be sealed inside the safe by their subordinates, but with the help of Will's explosive-laden watch (which was given to him by Jai Datta), the pair escaped and went after the couple at a train station. Regarding Hana, Frankie engaged in a gun battle with the adulterous woman, but after both of them seemingly ran out of bullets, the former took out a knife. At that moment, the latter revealed that she had another clip all along before killing her by firing several bullets at her. 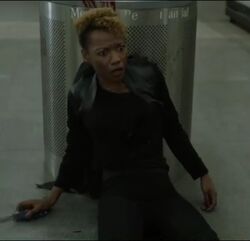 Hana after being shot multiple times by Frankie
Add a photo to this gallery
Retrieved from "https://femalevillains.fandom.com/wiki/Hana_Novak_(Whiskey_Cavalier)?oldid=186172"
Community content is available under CC-BY-SA unless otherwise noted.