Halure aka Pantha is a villainess from Zoot Comics #15. She appears in the Rulah, Jungle Goddess story Death Dancers.

Halure is a dancer in the city, she is asked by her agent, a man named Jack, to come up with a new dance routine for the agency's brightest star Lucy Troller. Halure is angry with Jack as she was promised the star role, but she agrees.

Halure was originally from a tribal family in the jungle, where she was called Pantha. She takes Lucy and Jack into the jungle to meet her family as they have many tribal dances that Lucy can learn.

But what she didn't tell Jack and Lucy was that her tribe are crazy dancing cannibals. Upon arrival they are taken and tied to a post, where Halure becomes Pantha of the Surachii tribe. She murders three men tied to posts with spears and forces Lucy to dance for her family. Lucy's dancing goes on for a long time and she is not allowed to stop. Lucy goes crazy from this and grabs a spear and stabs Jack to death.

The story's heroine Rulah appears after hearing that the tribe had taken some outsiders. She tries to stop them but is tied to a post as well, Pantha prepares to kill her with a spear but Rulah is saved by her black panther, who then turns to Pantha and mauls and bites her to death.

Halure the dancer, she wants to have the leading role 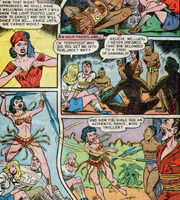 Halure becomes Pantha and murders some men with her spears 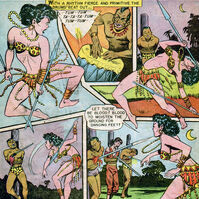 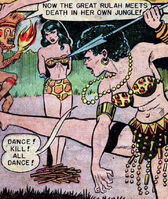 Preparing to kill a bound Rulah

Pantha is killed by a giant black cat
Add a photo to this gallery
Retrieved from "https://femalevillains.fandom.com/wiki/Halure/Pantha_(Rulah,_Jungle_Goddess)?oldid=129401"
Community content is available under CC-BY-SA unless otherwise noted.