She was a student at George Washington High along with the rest of the main characters and was first introduced in the Season 2 premiere running into Audrey Jensen at the movie theater she worked at. She expressed that she was a fan of Audrey since she survived Piper Shaw's killing spree and the two girls take a picture together. But it was later shown that Haley, along with a male friend, were planning to prank Audrey by making her think she was being chased by another killer with a Brandon James mask. Haley acted as though the "killer" stabbed her to death before Audrey (non-fatally) stabbed her co-prankster with a prop icepick. Haley got up and scolded Audrey before tending to her friend. She later tried to get Sheriff Miguel Acosta to arrest Audrey, but he concurred that she had acted in self-defense, angering Haley.

In the second episode, "Psycho", Audrey saw Haley nearby on her phone just when she got a text from Season 2's killer, taunting her with her secret connection to Piper Shaw. Thinking Haley was responsible, she confronted her in the stairwell and took her phone--only to see she was texting her boyfriend. As Haley stormed away past Noah Foster (Audrey's best friend), she told him that Audrey was "a psychotic bitch".

In the 5th episode, "Dawn Of The Dead", Haley revealed her vendetta against the Lakewood gang, believing that they were considered above the rules. She also cruelly mocked Brooke Maddox as she walked by in a cheerleader's uniform, having had to change clothes after having her boyfriend Jake Fitzgerald's body and blood dumped on her. After Emma Duvall (the show's main protagonist) was brought in for questioning regarding Jake's phone being found in her bag but released, Haley believed it was because of her mother being a medical examiner. Emma later confronted Haley, saying that she didn't have to be afraid of her, but Haley countered by saying she was. She also told her that everyone who came around her died and that her friends should be afraid too. Haley even went as far as to accuse Emma of being the true killer behind the previous massacre and call her entire family crazy. An enraged Emma slapped Haley, leading to a fight between the two girls. Later on, when Audrey exposed student Gustavo's morbid drawings, Haley called him a sicko and claimed that only "serial killers" could draw things like that, leading to Gustavo being beaten up.

In her final episode, "The Orphanage", Haley was the mastermind behind a party at Piper Shaw's abandoned orphanage, handing out Brandon James masks for everyone. When Emma asked her why, she said she was doing it as a favor to a "special friend". Haley later went to the back to retrieve more masks and was confronted by a hooded figure, who she revealed was her lover/partner (later revealed to have been Kieran, Season 2's murderer). She tried to kiss him, but was stopped when he lowered a mask over his face. As Haley prepared to perform oral sex, Kieran pulled out a knife. Haley screamed and tried to run, but was caught by Kieran, who stabbed her to death before hanging up her body for the police to find later.

Haley with her friends during the lockdown

Haley picked a fight with Emma during the lockdown....

....which resulted in Emma slapping her

Haley being attacked by Kieran during her party....

Haley after being stabbed to death.... 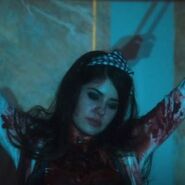 ....and her corpse being strung up for the police to find
Add a photo to this gallery
Retrieved from "https://femalevillains.fandom.com/wiki/Haley_Meyers_(Scream)?oldid=204279"
Community content is available under CC-BY-SA unless otherwise noted.