Start a Wiki
watch 01:51
The Loop (TV)
Do you like this video?
Haleh (Katrina Browne) is a teenage witch in the 1998 episode "A Wicked Good Time" for the TV series "Hercules: The Legendary Journeys".

Haleh is a teenage witch and is best friends with fellow witch Sariah (Kelly Addis) and the goddess Discord (Meighan Desmond).  Discord told Haleh to befriend Hercules' stepsister Seska (Jodie Rimmer), and invite her into her coven of witches.

Haleh is seen sunbathing when Hercules arrives and asks her where Saska is.  Haleh develops a crush on Hercules and he tells her to stop.

Later in town, a magistrate comes to Hercules and Haleh floats in the air and says Hercules is a warlock.  As a result, Hercules is arrested.  Hercules later lost his trial and Haleh appeared to him in his dream and freed him to an empty field.

Later Hercules finds Haleh practicing her magic and she casts a spell on him and assures she is gonna win.  Hercules asks Seska to get her hands on the book of magic for him.  She later turned Discord into a square.

Again Haleh began flirting with Hercules and attempt to kiss him while freeing him from jail.  When the hero rejected her feelings, she turned on him and summoned the spirit of Nekros, the first warlock.  Hercules was able to defeat them both, with Seska and Seariah's help. 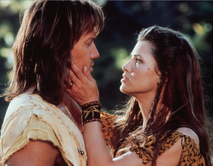 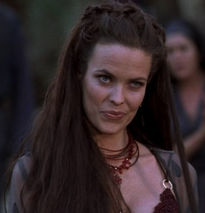 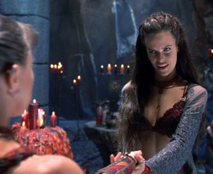 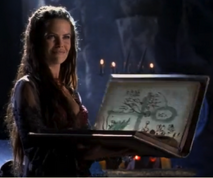 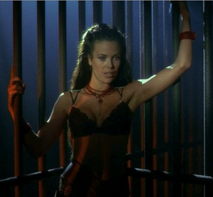 Add a photo to this gallery
Retrieved from "https://femalevillains.fandom.com/wiki/Haleh_(Hercules:_The_Legendary_Journeys)?oldid=160425"
Community content is available under CC-BY-SA unless otherwise noted.