Start a Wiki
watch 01:48
The Loop (TV)
Do you like this video?
Gwenn Harwin (Leslie Hope) is the main villainess from "Secret Santa," episode 5.09 of Castle (airdate December 3, 2012). She is the ex-wife of James Edmund Smith, a former business shark who had been working as a professionally trained Santa Claus.

Edmund's backstory revealed that he founded Suncove Funding, and five years prior, he and Michael Case devised an unlawful scheme to put people into expensive mortgages that they could not afford, resulting in their victims losing their homes. Beth Cabot and her son, Tim, were among Suncove's many victims, and they were suing Suncove following the death of the family's patriarch, as he was killed while he was on his way to one of his three jobs he took to pay the mortgage. Regarding Gwenn, her then-husband's villainous deeds paid for her lifestyle, but one Christmas Eve, Edmund began feeling guilt for his actions, and after the couple watched the classic film, It's a Wonderful Life, together, he left Gwenn.

Edmund spent the five years that followed working as a Santa, doing so as part of his redemption. All the while, he moved next door to the Cabots, and it was a week prior that he revealed his true identity to Tim. Edmund found out about the lawsuit and worked with him to help him and Beth, and during his quest, he went to Gwenn and informed her that he was blowing the whistle on Suncove. Edmund's actions would result in Gwenn losing her lavish lifestyle, and not wanting to give that up, Gwenn turned heel and decided to eliminate her ex-husband. The greedy villainess went to Case Commerce where Edmund was planning to collect the files containing the original documents, as well as returning the Cabots' clock to them in a helicopter. Gwenn tracked Edmund to the helipad on the building's rooftop and shot him to death, after which his body fell from the building.

Gwenn was interviewed by Richard Castle and Kate Beckett, acting mournful over Edmund and stating that he was being followed by a person in a motorcycle. That person was revealed as Tim, who informed the pair about Edmund planning to help him and his mother win their case, leading to Michael Case being suspected. Case denied killing Edmund, but stated he knew who did it, stating that she was at the party that night. Case's words revealed Gwenn as the killer, and after the villainess denied the claim, Beckett and Castle uncovered her motive:  not wanting her lavish lifestyle taken away by Edmund's selfless act. At that moment, the evil Gwenn confessed to killing Edmund, while claiming to be hurt by Edmund and adding that she was happy to see him that night before she killed him. Following her confession, Gwenn was arrested (off-screen). 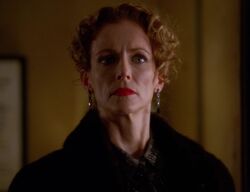 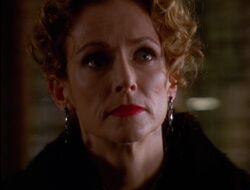 Gwenn during her confession to killing her ex-husband
Add a photo to this gallery
Retrieved from "https://femalevillains.fandom.com/wiki/Gwenn_Harwin_(Castle)?oldid=162361"
Community content is available under CC-BY-SA unless otherwise noted.