Start a Wiki
watch 01:51
The Loop (TV)
Do you like this video?
Gwen Briggwell is the protagonist of the 1983 comic "Oltretomba Special: La soffitta delle memorie", aka. "Underworld: The Attic of Memories". She was created by artist Pier Carlo Macchi and writer Carmelo Gozzo.

Gwen and Rodney are two newlyweds who have transitioned to the househunting phase. They meet with an elderly woman named Mrs. Kersenford who happens to own a house on the outskirts of London. The woman is particularly elated to have found a renter that she can trust, and gives the couple complete freedom to redecorate the home as they see fit.

While Rodney is at work one day, Gwen decides to move several objects which she doesn't feel they'll be needing up into the attic. While up there, she makes two peculiar discoveries; a large basket filled with cloths taken from shredded garments, and a trunk filled rusted and bloodied torture devices. The woman receives an even bigger surprise when she simultaneously grabs an item from each container, causing a vision of a woman being tortured and killed to enter her mind. Gwen is initially freaked out, and decides to head back downstairs to resume her cleaning duties. However, it proves to be a very difficult task, as she cannot keep her mind off of the thought that the vision may not have been due to just her overactive imagination.

Gwen returns to the attic and experiments with a different cloth and torture instrument, which expectedly shows the torture of a different girl, in a different period of time. Feeling lightheaded, she decides to take a nap in a nearby rocking chair. While she sleeps, several rats in the attic carry yet another unique pairing of objects into her lap. A third extended sadistic dream plays out in Gwen's mind, only this time she becomes aroused and eventually masturbates to it.

Gwen is shocked by this dark side of her personality that she was not aware existed, but after a few more attempts, reasons that she shouldn't feel ashamed for pleasuring herself to the murder of women who were killed so long ago. Suddenly, Mrs. Kersenford shows up and takes one of the torture devices - a cleaver, which is unusually sharp and free of any blood - into her hand. Gwen initially believes that the woman plans to kill her, but it is in fact quite the contrary.

Kersenford explains that she is a witch who has lived for several centuries thanks to her Satanic arts. The visions linked to the torture instruments and cloths represent actual events, orchestrated by herself, in which she used her magic spells and potions to force randomly selected men to carry out the atrocious actions against innocent women for her personal pleasure. Kersenford goes on to say that she had keenly picked up on Gwen's dormant sexual sadism when she first came to tour the house, and is very glad that her hunch was proven true. She says that her own time on this earth is at an end, for even a witch must grow old, and that she has been seeking a successor. The witch says that the decision to accept is entirely up to Gwen, but adds that she knows deep down that the girl won't have the desire refuse. She further states that Gwen can take possession of her book of spells, of which the purposes are limitless, and that if she cleans up all the torture instruments, they will be able to be used again. Gwen thinks for just a moment, and then murders the witch with the meat cleaver, as had been established.

The final scene of the story features Gwen serving a mind control potion to Rodney, and then encouraging him to rape and brutally massacre a random woman from his place of employment. The spell having successfully taken effect, the husband assures his wife that he will do just that.

Kersenford is quite happy to have finally found two renters... one much more so than the other! 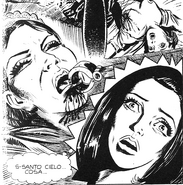 Though initially shocked by what she's seeing...

...Gwen soon determines it to be a wonderful discovery. 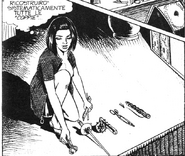 She even goes as far as to organize the pairings, so that easily select them via whim in the future... 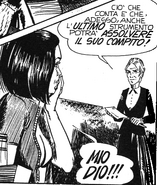 "Stay back!" she shouts to Kersenford... 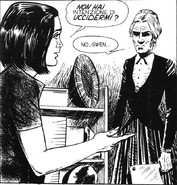 "You mean you don't plan to kill me?" she then says, with a sigh of relief.

Happy to be alive, it nevertheless does not deter the sadistic Gwen from ensuring the agonizing deaths of many other women in the future.
Add a photo to this gallery
Retrieved from "https://femalevillains.fandom.com/wiki/Gwen_Briggwell_(Oltretomba)?oldid=165815"
Community content is available under CC-BY-SA unless otherwise noted.