Guy Champion (Edina Ronay) is an assassin villainess who appears in the 1974 UK movie Zapper's blade of vengeance (sometimes known as The Swordsman). The film was a sequel to 1973's Big Zapper. Guy Champion was played by actress Edina Ronay (b 1944).

A gypsy like villain called Reynaud Duval (Alan Lake), who's also an expert sword fighter, was adopted when young into a wealthy household. He is now committing murders in order to possess all the family wealth. He is determined to murder his teenage step brother, Karel Duval, who still stands in the way of him gaining the fortune. The young heir comes under the protection of private detective Harriet Zapper (Linda Marlowe) who thwarts Reynaud's evil plans.

Guy Champion - character and role in the story -

Killing Harriet Zapper. Acquiring a share of a large inheritance criminally with her villainous lover

Shot dead by the heroine.

Guy, girlfriend of Reynaud Duval, is a beautiful slim white woman with short hair, who dresses in a very skimpy mini skirt and high heeled boots. She is icy and totally ruthless, quite Reynaud's equivalent in evil. She becomes an assassin for him, using her favorite weapon, a crossbow.

While Guy may arguably be the sexiest female assassin ever to appear on film, she's not the most successful. She only manages to wound Karel with her crossbow bolt, not kill him; she pursues Karel's protector, private eye Harriet Zapper, to France, but manages to accidentally hit a bystander and kills him instead of her intended target, Harriet. Evading all Guy's attempts to kill her, Harriet soon turns the tables on the evil assassin.

Harriet Zapper, knowing Guy is trailing her in France with murder her object, sets a trap for the female assassin. She pretends to take an innocent swim in the sea. Guy follows her onto the beach with the crossbow and begins firing bolts at Harriet. Fully clothed (or as clothed as Guy ever is!) Guy wades into the water after Harriet as the latter dives underwater time and again to dodge the assassin's vicious crossbow bolts. Suddenly Harriet leaps up from underwater, a pistol, which she's protected from damage in a plastic bag, is in her hand. She fires again and again at the stunned and horrified Guy, who drops the crossbow as bullets are seen graphically slamming into her - the totally outclassed assassin falls backwards dead, a floating corpse. 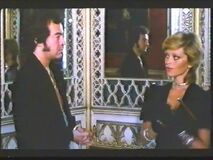 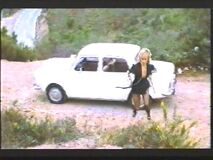 Guy on her way to kill (Edina Ronay) 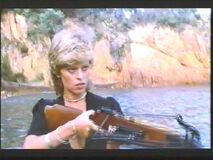 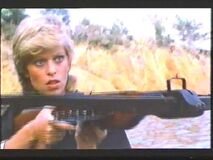 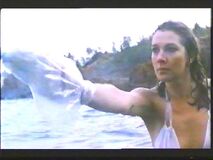 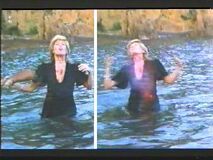 Add a photo to this gallery
Retrieved from "https://femalevillains.fandom.com/wiki/Guy_Champion_(The_Swordsman)?oldid=192041"
Community content is available under CC-BY-SA unless otherwise noted.