Start a Wiki
watch 01:51
The Loop (TV)
Do you like this video?
Gurthe, the Viking Queen was a villainess who appeared in the 1949 episode "The Ice Vikings of Valhalla" for the comic bood, Rulah, Jungle Goddess.

Rulah and Tom Preston are on a safari.  They happen across an uncharted valley, and are suddenly confronted by a group of Vikings led by a statuesque blond named Gurthe.  Rulah and Tom are taken captive and led to a cold and gloomy cave, where they are placed in chains.The prisoners are put to work stacking wood.

Finally, Rulah and Tom are taken before Gurthe, who for sport has the jungle queen take on her champion, Frieda.  After a fierce battle, Rulah is spared   Tom is spared in order to marry Gurthe.

Rulah began to ware down Ivorga, who was jealous of the attention Gurthe was showing Tom.  Ivorga decided to help the two escape from this land, in order to keep Gurthe to himself.

Gurthe strapped Ivorga onto the bow of the boat to humiliate him for his betrayal.  While Gurthe and her craft give chase in the boats, they quickly lose steam.  Their lungs are not adjusted to the warm weather, and have to turn around and go back.  Rulah, is merciful and lets the ancient boat and her foes leave without bloodshed. 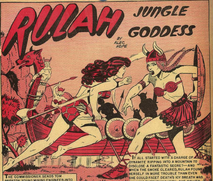 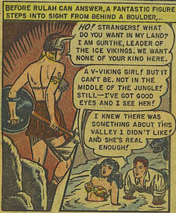 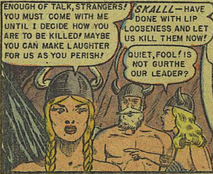 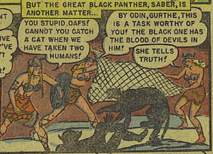 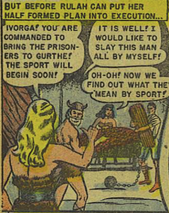 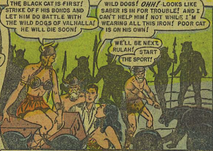 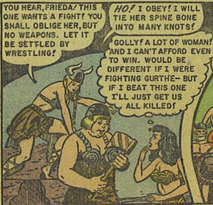 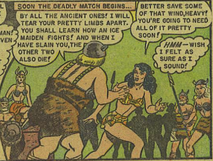 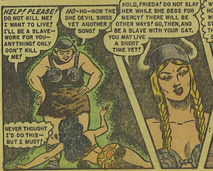 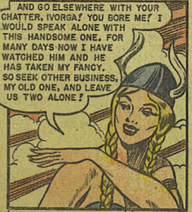 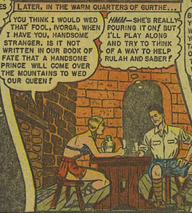 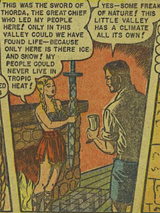 Add a photo to this gallery
Retrieved from "https://femalevillains.fandom.com/wiki/Gurthe_the_Viking_Queen_(Rulah,_Jungle_Goddess)?oldid=155311"
Community content is available under CC-BY-SA unless otherwise noted.